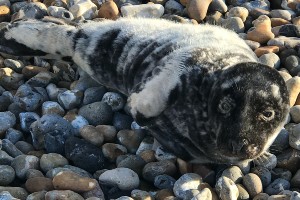 We rescued a skinny and lethargic seal pup which was found on Hythe beach on December 24.

Inspector Clive Hopwood rescued the young seal from a Kent beach after a member of the public contacted us to say the pup needed help.

The seal pup was very thin and lethargic and there was no mum in sight.

This pup was really lethargic, usually when we approach seals they will try to go back into the water but this little pup was too weak to try and get away from me so I collected him and took him to RSPCA Mallydams Wood Wildlife Centre in Hastings for rehabilitation.

This pup was obviously in distress but not all lone seal pups have been abandoned or are in need of help. If you find a seal pup that looks fit and healthy and shows no signs of distress monitor it first from a safe distance for 24 hours. Please don't touch seal pups, as they can give a nasty bite, and keep children, dogs and other animals away from them.

If the mother does not return within 24 hours, or you think that the pup is sick or injured ¿ please keep a safe distance and call our advice and cruelty line on 0300 1234 999.

He'll be released back into the wild once rehabilitated 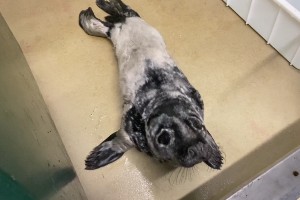 The grey seal weighed just 17.7kg when brought into the centre so was very underweight. He has now been named Nanta by our staff working on Christmas eve - the name comes from an Ewok character in the Star Wars films.

He was put on antibiotics and has been given plenty of herring to eat to help build up his weight. Already, he has started eating on his own and looks a lot brighter than when he first came into the wildlife centre. He's still quite young, around four to eight weeks old, and once he has been fully rehabilitated he will be released back into the wild.

He's looking a lot brighter and absolutely loves the water which is all good news. Let's hope Nanta has put on a few pounds over the last week with lots of tasty Christmas (fish) dinners!