An RSPCA rescuer swam out into a lake to save a buzzard tangled in a discarded fishing line and released it back to the wild hours later. 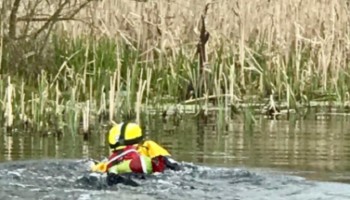 We were called to help after a dog walker spotted the distressed bird of prey hanging from a bush in the island of a lake in Mollington Golf Course, Townfield Lane, Chester, at 9.30am on Wednesday (21st).

RSPCA animal rescuer, Inspector Anthony Joynes was sent to the scene and could see the stricken bird hanging over the lake so put on his dry suit and swam out to help the bird.

Anthony - one of 60 officers trained and equipped to deal with animals caught up in flooding and launch water rescue missions - said:

I could see the buzzard had a fishing line around his wing so I swam the long way across the lake from behind to reach it as I didn't want to cause it any further distress. If the bird saw me I was worried he may panic and cause further injury.

When I got to him I could see the line only around the feathers and not involving any of the bones and had luckily not caused any wound or serious damage.

Also the buzzard was managing to balance with his talons on the ground - so although he was flapping around to try free himself he had not caused too much damage to himself.

Sadly in situations like this birds get stuck dangling in mid-air from fishing lines and as they try to free themselves they cause more damage and many end up with catastrophic injuries. 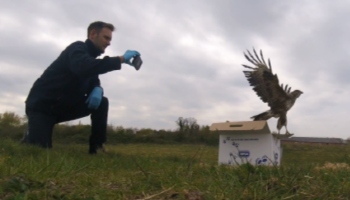 Anthony managed to cut the buzzard free with a knife then untangled the line from his wing. He was then able to wade back through the shallower water on the other side of the lake.

He examined the bird which appeared in good health but was obviously tired from his ordeal so he took him for some rest and recuperation.

After a couple of hours the buzzard was back to full health and Anthony released him back into the wild at the golf course.

When I released him I could see another bird hanging around which I suspect was his mate and they may have dependent chicks nearby so it was great to let him fly to freedom.

A dog walker reported hearing the bird in distress and a woman stayed at the scene until I arrived to show me the exact location of the buzzard - so I'm grateful to them both for their help in saving the bird.

It's always a great part of the job to carry out a rescue and then release an animal safely back.

Sadly fishing litter in our waterways is a major problem and it is so damaging to wildlife and we have to deal with many incidents of this nature - and often birds do not survive the ordeal.

I would urge all anglers to be responsible and remember to take home any litter if they go fishing - discarded lines and hooks can easily snag water birds and other wildlife, causing terrible injuries, suffering and even death.

Most anglers are very responsible when disposing of their litter, but it only takes one careless person to endanger the life of an innocent animal.

We're asking all those who enjoy fishing to join the Angling Trust's Take 5 campaign and make use of the Anglers National Line recycling scheme to dispose of their waste tackle and line.

Find out information about how to dispose of your fishing litter properly.