Red kite released after shot bird was rescued and rehabilitated

An inspector who rescued an injured red kite who was found beside a road unable to fly has filmed the magical moment she released the majestic bird back into the wild after a month of rehabilitation.

Our inspector Suzi Smith had been called to rescue the bird after a concerned member of the public found the red kite unable to take off because of an injured wing.

Found at the side of the A470 in Builth Wells on March 16, the bird was safely captured by Suzi before being taken to Vale Wildlife Hospital and Rehabilitation Centre to be assessed. While there, vets x-rayed the bird and discovered that the kite had been shot. 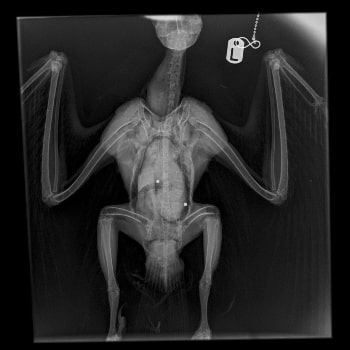 Suzi, who has been rescuing animals for us for twenty years, said:

"It was an honour to be able to release this beauty after weeks of treatment and rehab at Vale Wildlife Hospital.

"The bird had been shot, and had a guarded prognosis but the team at Vale worked their magic and the red kite has thankfully been able to go back into the wild where they belong.

"It's very upsetting to think that this beautiful bird was deliberately targeted and shot and this is an offence under the Wildlife and Countryside Act 1981.

"Anyone with any information about how this bird came to be harmed is urged to call our inspector appeal line on 0300 123 8018."

All wild birds are protected under the Wildlife and Countryside Act 1981 (as amended) and it's an offence to kill, injure or take wild birds except under licence. The maximum penalty, if found guilty, is six months in prison and or an unlimited fine.