Owl did you get in there?

Owl did you get in there?

One of our officers came to the rescue of an owl who got stuck in a greasy kitchen extractor fan for two days at a disused hotel in York. 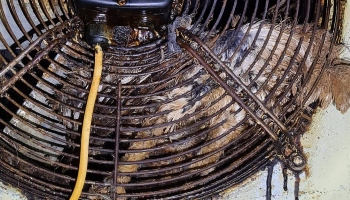 The owner of Alhambra Court Hotel alerted us after hearing noises coming from the kitchen's industrial extractor fan. Animal rescue officer Leanne Honess-Heather was dispatched on Monday 18 January to help free the bird.

"The hotel owner heard noises coming from the extractor fan but wasn't sure what it was. When she went to investigate she spotted a tawny owl sitting behind the fan. The bird seemed bright and alert despite being trapped.

"When I arrived at the disused hotel the owl, who had tried to push her way out, was then wedged tight between the fan blades in the extractor!

"We suspect the bird had fallen down the large extractor and then, when trying to get out, had got wedged in the fan. The fan was sticky and covered in grease which made it harder for the bird to free herself.

"Initially she was stuck at the top of the fan, upside down. But then, struggling, she worked her way to the bottom. Thankfully, the cover was easily removed and we were able to free her. She had no major injuries but she was dehydrated and covered in thick grease so needed a good bath."

The owl had to be de-greased

Leanne took the owl to Ryedale Rehab where she was given critical care, cleaned up, dried off and taken in for monitoring. 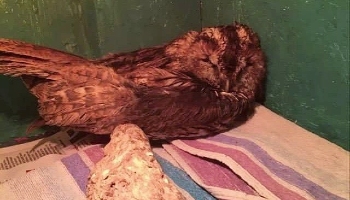 "They carefully washed the grease off of her feathers using original green Fairy Liquid to ensure no residue was left in her feathers. The owl wasn't too impressed by bathtime but, after towel drying her off and popping her in a warm cage to dry out, she looked and felt much better.

"She'll now stay at Ryedale Rehab until she's been given a clean bill of health and is ready to be released back to the wild where, hopefully, she'll stay away from any kitchens!"