More than 4,600 animals reported dumped to us last winter

More than 4,600 animals reported dumped to us last winter

We saw more than 50 animals a day reported abandoned last Christmas and we're braced for more this winter after pet ownership surged this year.

We received more than 4,600 reports of abandoned animals last winter and are worried a surge in pet ownership could result in more unwanted animals this year.

Dogs were the most abandoned pet with a huge 2,425 abandonment reports for dogs during the winter months.

Already this November, there have been 985 reports of dumped and unwanted animals to our cruelty line and we're predicting that the reports of increased pet ownership, coupled with a deepening recession could see more pets left out in the cold this year.

During the lockdown there have been reports of a rise in people buying or adopting new pets, often for the very first time. Whilst it's great that so many people have become pet owners and have found their pet to be a real source of comfort during these challenging times, we are concerned that some people may have bought a pet on impulse without considering how their lifestyle might change once the pandemic ends. On top of that, we are facing real economic uncertainties, and, as in previous recessions, people may simply find themselves unable to afford their pet.

The last thing we want to see is animals dumped and left out in the cold so we'd urge anyone who is struggling to care for their pets to please reach out to friends, family and charities for support instead.

Just a few days ago, Gabe was found abandoned and left tied up near our Harmsworth Animal Hospital in London.

The cost of keeping a pet surprises new owners 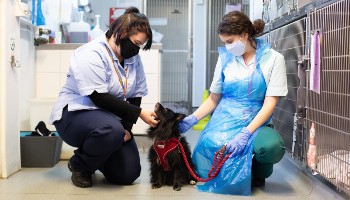 Our poll, conducted by YouGov revealed that just over one in ten (11%) pet owners had taken on a pet during lockdown and, of those, nearly one in ten (9%) said that their pet had been more expensive than they had expected. Just over one in 20 (6%) were worried about being able to afford them in the future.

We would always urge anyone considering getting a pet to thoroughly do their research to make sure they can give them the time, money and care they need for the rest of their lives. As the impact of the pandemic puts a strain on people's finances and as many people start to return to work or some kind of normality, the fear is that we'll see a surge in abandoned and neglected animals coming into our care.

The most common concern reported to our cruelty line last winter was neglect, with more than 76 reports a day relating to pain and disease (6,916) and 57 reports a day for unsuitable environments (5,134).

Since the start of lockdown, from March 23 until November 29, our cruelty line has received 11,052 reports about abandoned animals.

Our officers are out on the frontline 365 days a year to help those animals in need and this Christmas will be no exception. Donating just £25 could help keep our Animal Rescue Teams on the road.