A footballer has been sentenced to 180 hours community service for causing unnecessary suffering after his brother filmed him kicking and hitting a cat and posted it online. 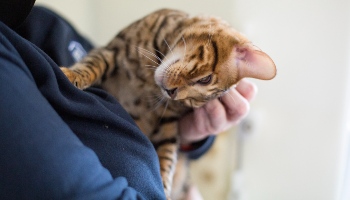 Kurt Zouma and his brother Yoan Zouma both appeared at Thames Magistrates' Court on Wednesday (1 June). They pleaded guilty at a previous hearing, on Tuesday 24 May, following an investigation, by the RSPCA, into a video that was posted on social media.

Kurt pleaded guilty to two offences under the Animal Welfare Act 2006 of causing unnecessary suffering to cats. His brother, Yoan, also appeared at court where he pleaded guilty to one offence of aiding, abetting, counselling or procuring Kurt Zouma to commit an offence, under the Magistrates Court Act 1980.

Those cats look to you for their care and needs but you did not provide for their needs but caused them unnecessary suffering for your own amusement.

District Judge Holdham described the incident as "disgraceful and reprehensible" and added that "As a public figure you must be aware that others look up to you and many young people aspire to emulate you."

In mitigation it was said the brothers expressed genuine remorse and had pleaded guilty at the first opportunity.

The RSPCA launched an investigation after a video, posted on Snapchat by Yoan Zouma on 6 February, was reported showing Kurt Zouma chasing a cat around a house, kicking and slapping him.

On 9 February, Kurt Zouma's two cats were seized by police and taken to be examined by a vet before being taken into the care of the RSPCA, where they've remained since.

Both cats were signed over to the RSPCA by Kurt Zouma at the first court hearing so will soon be matched with a loving new home.

We are pleased there has been swift justice in this awful case and our focus now is matching these beautiful cats to the loving homes they deserve.

This case sends a really clear message that animals should never be treated like this, and posting videos of animals being harmed on social media for likes is abhorrent.

We believe teaching children to treat animals with kindness will lead to a more compassionate society. We need positive role models to help us do that.