Two rescuers who work for the RSPCA have also been volunteering their services out-of-hours from their Stockport home - to help save hundreds more rescued animals in the Greater Manchester area. 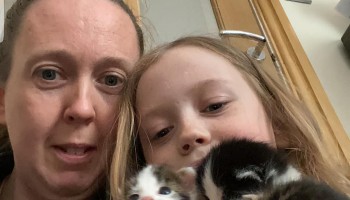 The couple have cared for hundreds of animals

Animal rescue officers Sonia Hulme (pictured with daughter Erin) and partner Steve Wickham have set up a wildlife triage in a converted garage at their home to help animals in need and to free up their colleagues time to carry out more rescues in the area.

Since April when they started the venture, they have cared for hundreds of animals - including around 100 ducklings, numerous fox cubs, goslings, swans, geese, hedgehogs and even mice. 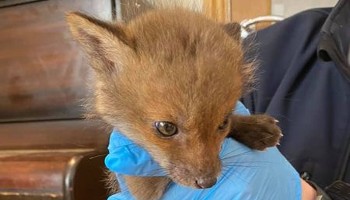 Sonia, who has been an RSPCA animal rescuer for 15 years, came up with the idea after seeing her colleagues in the Greater Manchester group struggling to cope with the amount of wildlife they were rescuing during the evenings in the busy spring and summer period.

The animal welfare charity always sees a surge in calls about baby wild animals at this time - some have been attacked and injured by another animal, others separated from their mum and others will be orphaned. 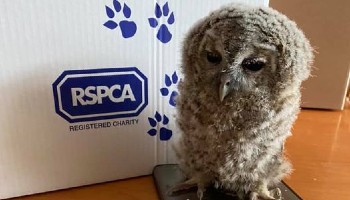 Traditionally RSPCA rescuers in the Greater Manchester area will take any wild animals in need of treatment to Stapeley Grange Wildlife Centre, near Nantwich, Cheshire, which is an hour's drive away. But at this busy time, it was taking colleagues away from being able to rescue more animals for two hour journey time.

Sonia decided to offer the triage service from their home so rescuers were not taken off the road for such a long period. She has bought heat pads and set up incubators -  which a local group kindly donated to her - in the converted garage for her baby wildlife. Now Steve and Sonia's colleagues take animals in need to their home late into the evening - when Stapeley Grange has closed. 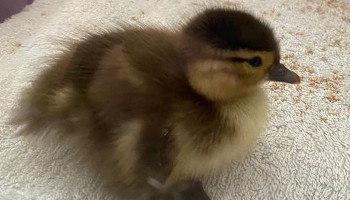 The couple may have finished their RSPCA day job but then they carry on their voluntary role afterwards. They are often busy triaging injured wildlife such as baby birds or mice and up to every half an hour, they may be hand-rearing some of the rescues into the evening.

Then early in the morning, the dedicated pair are up feeding their patients again or giving them any medication they may need. They also closely liaise with wildlife experts at Stapeley Grange closely about the best course of action for the animals.

Every day in the morning a volunteer driver from Stapeley Grange will then collect all the animals taken into Steve and Sonia's care from the day before and transport them to the hospital in one journey - instead of many officers making separate two hour round trips to the centre. This has meant that their colleagues have been able to attend more calls and rescues and ultimately save more animals' lives.

We have been very busy over the summer and you never know what you might get from one evening to the other. Sometimes we have baby mice that need hand-rearing so we have to use a little brush dipped in kitten milk to feed them.

We also get various birds brought in - some are so small it is hard to tell what species of bird they are. But we have had a large variety from a blackcap, to magasiner to ducklings - a lot of ducklings!

Some baby birds need hand-rearing using a small syringe - other birds may need tube feeding. So we have to get up at first light to feed them and I have trained helpers who can feed them while I am working. For older birds, we sometimes have to dig the garden to get worms for them.

Steve, who has been an RSPCA rescuer for 25 years, said offering the triage service was all Sonia's idea but was happy to help her. He said:

Sonia came up with the plan as we always get busy dealing with wildlife - particular baby animals - during the spring and summer months.

Sometimes we have been about to go to bed when we get a knock at the door with some rescued animals and then we have to feed them or treat them before we can go to sleep.

For Sonia, it really is a labour of love and it is great that by doing this it frees up our team members to help even more animals.

Inspector Jess Arajo, who works in the Greater Manchester area and uses the service, said:

It is great because it allows us to drop off injured wildlife in safe hands during a traditional out-of-hours period which means we can go back on the road and help more animals in need.

It really helps all the inspectors in the group and gives the animals a safe place to go for care before they come here.

They triage the animals and share their expertise with the inspectors - so officers really learn from them too.  Having animals that have been fed overnight before they arrive at the hospital means that they stand more of a chance of survival.

It also helps us when we are releasing animals back into the wild. We can drop ones who have been rehabilitated at their house for either Sonia or Steve to release when we pick injured wildlife up from them.  It really is a win-win for all of us and we are all grateful for their dedication.

How you can help animals in need