A couple have been banned from keeping animals for life after four severely neglected ponies were found "imprisoned in deplorable conditions" at a smallholding in Lancashire. 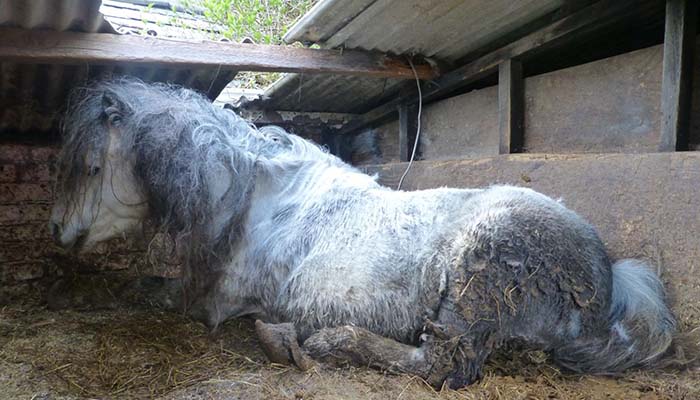 The RSPCA inspector who investigated the case said "the extreme level of neglect found will remain with me" and said she had not seen anything like it in her entire career.

The ponies - aged around six and seven years old -  were unable to stand up naturally due to the level of faecal buildup in the cramped conditions and it is thought they may never have left their filthy stables during their whole life. Three other ponies were found in poor health stabled at premises nearby.

Jack Carter and wife Barbara both of Tarleton, Lancashire, who bred, showed and kept horses for 60 years, both pleaded guilty to three animal welfare offences when they appeared before Lancashire Magistrates on Thursday (20 Jan) in a prosecution brought by the RSPCA.

The court heard how the RSPCA were called to investigate after a member of the public raised concerns about the welfare of a pony believed to be in their care. 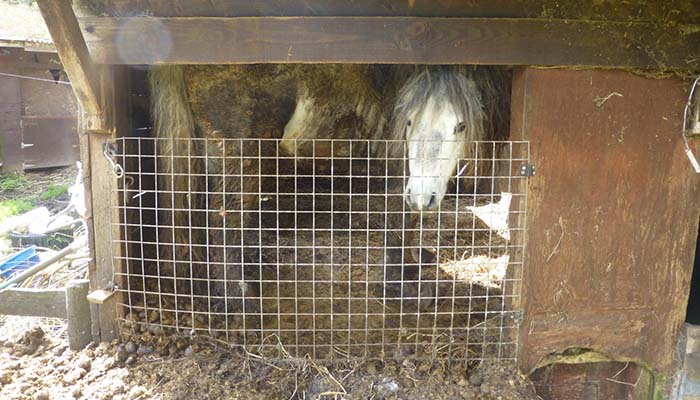 RSPCA inspector Vicki McDonald attended the address on Monday, March 22 (2021) and could see a rundown stable block behind the couple's house but was unable to access this without permission so over the following days made several attempts to contact the couple by telephone to arrange to visit them.

On a number of occasions, Jack Carter messaged back saying he was unable to show the inspector around the property, citing various reasons or by failing to make contact with her.

Inspector McDonald was concerned that the defendant was avoiding a visit so returned to the area again to view the stable from a public footpath nearby - where she saw that a green sheet and wire mesh now covered the doorway of the dilapidated stable she saw on her first visit.

She believed there was a pony inside which Jack Carter was trying to hide so she arranged a formal visit with Lancashire police which took place on Wednesday, April 7.

She met with Jack Carter who denied there were any ponies or horses at the site on a number of occasions but when she asked to see inside the stable at the back of the house he reluctantly agreed.

She told the court of her shock from what she found in this stable and a further three ramshackle stables which she checked and discovered a further three stabled ponies in a yard area directly behind the house.

Inside the first stable, I found a grey pony in horrendous environmental and physical condition. I had never seen anything like it in my entire career. The pony was stood on top of deep rotting litter that had built up so much that it reached the top of the stable door. The pony was unable to fully stand up and its back protruded through a hole in the stable roof.

In addition to that, I saw that the pony had severely overgrown feet beyond anything I had seen before. The hooves extended out and corkscrewed. Further rotting litter was piled up in front of the stable preventing the stable door from opening.

The next stable I saw housed a chestnut and white pony and across from that were two further grey ponies. The two grey ponies' behaviour was particularly disturbing. They seemed very stressed and erratic. I noticed that all the ponies had matting to their coats. They also had patches of sore skin, most likely from having no option but to lie in their own filth.

To say the physical and environmental conditions of these ponies was shocking is a gross understatement. As with the first pony I had found, these were also stood on deep rotting litter piled as high as the stable doors inside and also in front of the doors preventing any possibility of the stable doors opening. They all had horrendously overgrown hooves that had started to corkscrew. There was very little room for them to move around or even stand normally. Again their backs reached the stable roofs.

Inspector McDonald called for an independent vet to attend the site and sadly the vet advised that all four ponies would have to be put to sleep to end their suffering.

The barbaric conditions the horses were kept in

The ponies were unable to get out of the stables due to their ill health and the build up of filth so staff had to dig their way in and break down wooden walls to get to them.

The equine veterinary surgeon said in her report that the horses were neglected in every aspect of basic requirements and stated the conditions they were kept in were "extremely barbaric". 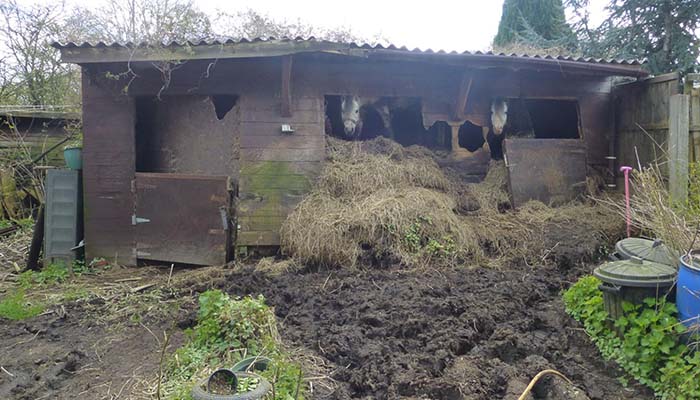 "The severe lack of care and level of suffering endured by these ponies was prolonged, wholly avoidable and totally inexcusable. It was heart-breaking to find them in such a neglected state and for them, after such an awful life, to be beyond saving.

"These ponies were kept stabled within a few feet of the back door to Carter's home address. They would have seen them daily and their plight would have been ignored daily. The extreme level of neglect I witnessed, in this case, is unlikely to ever be surpassed and will remain with me.

"They were imprisoned in cramped, ramshackle and rotting conditions, forced to live and lie amongst their own faecal matter. They could not stand naturally, they could not behave naturally, graze, exercise or socialise amongst others of their kind, they were not provided with any of the necessary veterinary or farrier care they urgently required and they could not escape their confines or be accessed in an emergency. In my opinion the neglect of these ponies was physically, environmentally and psychologically cruel and this had clearly been their existence for a considerable period of time."

Jack Carter then told the RSPCA they had further ponies stabled a short walk away in Liverpool Road, so the premises were visited and five ponies belonging to the couple were found at the second property. They had access to food and water but two needed treatment - one for urgent dental work and the other for an eye condition.

All the ponies at the second property were signed over into RSPCA care and taken for an emergency veterinary examination. However the court heard that, sadly, equine vets found four of them were in such a poor state the kindest thing to do was to put them to sleep to end their suffering.

The remaining pony was taken into RSPCA care and was rehabilitated and will now be found a new home.

Defendants refused offers to help with the horses' welfare

As well as the life ban on keeping all animals both defendants were imprisoned for 12 weeks suspended for two years and were both ordered to pay £500 cost. In sentencing the magistrates heard how the Carters had been given the opportunity to work with the RSPCA on previous occasions but did not seek that help.

The presiding magistrate said the case was "extremely distressing" and added:

This crosses the custody threshold for the reason of prolonged ill-treatment and neglect which resulted in a high level of suffering. The only reason the sentence was suspended is to take into account the defendant¿s medical needs and age. If it was not for these factors you would be going straight to prison.

This was a shocking case of needless cruelty to several ponies that should not have happened. I am happy that the court took the matter so seriously and the South Rural Task Force will continue to investigate and target animal cruelty offenders. We would like to thank the RSPCA with this case and will continue to support them.

The offences they admitted 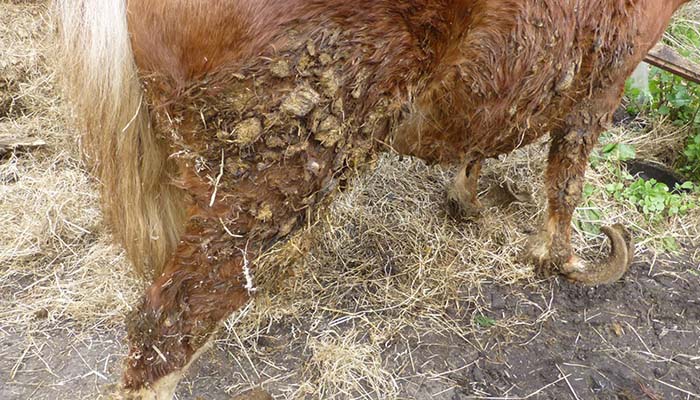 That between 1 January 2021 and 15 April 2021 in the vicinity of Longlands Farm, Tarleton you being jointly concerned with Jack Carter did cause unnecessary suffering to a certain animal namely a black Welsh Section A mare by providing inadequate dental care leading to ulceration in the animal's mouth and trauma to its tongue and you knew or ought reasonably to have known that your failure to act would have that effect or be likely to do so, contrary to Section 4, Sub section 1 of the Animal Welfare Act 2006.