The RSPCA advises snake owners to be extra-vigilant as the charity braces for a rise in stray pet snakes due to the hot weather. 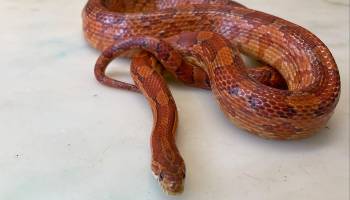 The warning comes as a stray 3.5ft-long corn snake was found loose in a wheelie bin in Stoke-on-Trent last week (7 July). The surprised resident described how he "jumped and screamed" after lifting the lid of his wheelie bin and finding a snake staring back at him.

Last year, the RSPCA received 1,219 reports about pet snakes in need of help, with numbers of calls reaching a height of around 180 per month - that's nearly six per day on average - during the hottest months of June, July and August.

This year, as the heatwave continues, the charity advises snake owners to be particularly careful and double-check that animal enclosures are securely fastened.

Many of the rescue snakes are thought to be escaped pets

"Snakes are excellent escape artists and will take the opportunity of a gap in an enclosure door, or a loose-fitting lid to make a break for it.

"Last year, we took over 1,200 reports about snakes, with the highest number of calls coming in during the summer months. This is not surprising, as snakes become more active during hot weather. So we would urge all pet snake owners to be extra vigilant at this time of year, invest in an enclosure suitable for the particular species and make sure that the enclosure is kept secure - and locked if necessary - when unattended.

"As highlighted in our Cancel Out Cruelty campaign, the RSPCA receives around 90,000 calls to its emergency line every month but in the summer calls rise to 134,000 a month and our officers are flat out trying to prioritise animals affected by cruelty and neglect. So a few extra minutes checking that your snake is secure could help save our officer's time and allow them to save an animal that's in danger.

"Another reason why more snakes escape in the summer is that some owners take them outside to take advantage of the natural sunlight. While sunlight is good for reptiles, the RSPCA urges owners to ensure that their pet is kept secure when doing so, as they can warm up and move very quickly on a sunny day.

"Many of the snakes the RSPCA's officers are called to collect are thought to be escaped pets. Sadly, we also have to deal with a lot of abandoned snakes. We find that many people are unaware of how much of a commitment these animals are when they take them on, which we believe may be why we are called out to deal with hundreds of animals every year who have sadly been abandoned when their owners can no longer meet their needs.

"Exotic pets such as snakes often end up in the RSPCA's care after people realise they're not easy to care for, or the novelty wears off. Others are rescued after they have been abandoned or released on purpose, which then could pose a risk to our native wildlife.

"Sadly, our recently released Animal Kindness Index identified that the cost of living crisis is a huge threat to pet welfare in the UK and we would urge anyone who is struggling to cope with their pets to contact their local vet or rescue centre and ask for help.

"The needs of reptiles can be challenging to meet because they are just the same as they would be in the wild and are fundamentally linked to certain behaviours, diets or environmental conditions that can be difficult to replicate in a domestic environment.

"The RSPCA urges prospective owners of reptiles such as snakes to thoroughly research the needs of the particular species and what is required in the care of the animal, using expert sources. People should only consider keeping a snake if they can ensure they're fully able to provide for these needs."

Snakes are completely dependent on their owners for the correct accommodation, heating, lighting and feed, all of which must replicate their wild habitat as closely as possible to keep them healthy and allow them to express their normal behaviour. Without proper care, they can suffer from serious diseases, dehydration, injuries, parasites, and in severe cases or if left untreated, they can eventually die.

Most exotic animals kept as pets are unlikely to be able to survive in the wild in Britain and non-native species could pose a serious threat to our native wildlife. It's illegal to release or to allow to escape, any species that are not normally native to the UK.

What to do if you find a snake

If anyone finds a snake they believe is non-native the RSPCA's advice is to keep a safe distance, monitor the snake and call the charity's helpline on 0300 1234 999 or a local reptile charity will also be able to help.

Find out more about what to consider before adopting a snake.

If anyone loses a snake there are a number of lost and found pet websites where details can be logged, including Animal Search UK. It is possible to microchip snakes and the RSPCA would recommend that owners ask their exotics vet to do this, so that snakes can be easily reunited if lost and found.

Our frontline teams are working hard to rescue animals in need this summer but we can't do it alone - we need your help to Cancel Out Cruelty.

If you cannot donate, there are other ways you can help Cancel Out Cruelty, from volunteering with the RSPCA, holding a bake sale or fundraiser, or taking part in the #50MilesForAnimals challenge.