These magical pets are hoping to cast a spell over the hearts of prospective adopters and conjure up new homes this week, as the Harry Potter franchise celebrates a huge milestone.

We've named some of our special and spell-binding animals after famous characters from the franchise in celebration of the 20th anniversary - on Tuesday 16 November - of the release of the first film: Harry Potter and the Philosopher's Stone.

Harry Potter was rescued with his tiny newborn siblings after being orphaned. They were found alone and cold at just a day old but, despite the odds, survived and began their search for new homes. All of Harry's friends have now been adopted but he had to stay behind to have an operation to help him go to the toilet and, again, against the odds, he survived! 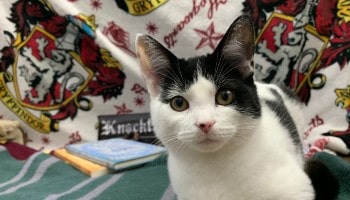 This mischievous and adventurous young cat is very inquisitive and, like his namesake, loves to explore. He loves company and gets on well with other cats so would love a feline companion. He is friendly, playful and very affectionate.

We don't understand why he keeps getting overlooked; we've checked and he hasn't been hiding under a cloak of invisibility so if you'd like a little magic in your life then this sweet guy could be the purr-fect puss for you!

This trio of gorgeous ducks have been renamed after the famous Weasley family in celebration of the 20th anniversary of the first film. Please meet Molly, Ginny and Arthur!

The lovely birds would like to find a new home together where they'll have access to a large area to roam and explore as well as a pond to paddle and splash in. Owners will need to keep their areas clean and water fresh, as well as provide them with a balanced diet.

These flame-haired red-heads are a sweet pair of young cats who are hoping to cast a spell over a cat-loving family and find their happy ever afters! Ron and Ginny are looking for an adult-only home with new owners who can be calm and patient with this sweet pair. They'd like to be the only pets and need a new family who won't try to pick them up as they find this very scary! 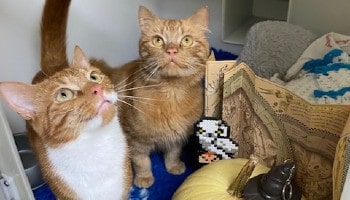 Ginny is a curious and confident cat who loves attention. She enjoys snoozing in her bed or perched on her cat tree and is happy exploring. She can be very chatty and purrs and head bumps for more when she gets fuss and strokes from our staff.

Poor Ron is a nervous boy who needs a new owner who can take things at his pace to allow him time to settle and start to come out of his shell. Initially he would hide from everyone but slowly he's gained confidence and now he enjoys a fuss or being groomed. Treats are the best way to his heart!

Just like his wizarding namesake, Harry is a very special boy who is looking for a lovely foster family to take him on as permanently, with ongoing support from our branch. He's seen his friends Potter, Ron and Hermione go off to their fur-ever homes but is still waiting for his happy ever after.

He is a sweet, friendly bun who is happy being handled. He's looking for a new home with some other rabbit friends to live with and an experienced owner who is confident handling buns. Sadly poor Harry has a medical condition called hypospadias - a birth defect which can occur in male rabbits and impact how they urinate. He needs topical cream administered daily and the condition will need to be monitored closely.

Our Harry Potter superfans at Bryn-y-Maen Animal Centre, in Wales, have named a number of their beloved cats after Harry Potter characters in the hope of finding them all spellbinding homes. 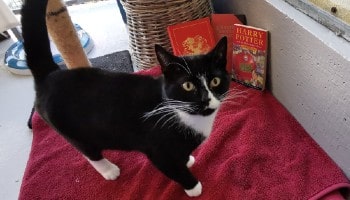 Four-year-old Victor Krum is, like his namesake, a quirky chap who is very independent and would like to be the only pet in the home; so he can have all of the attention! He loves to nap and will need to be able to go outside and explore.

Eight-year-old Moaning Myrtle is a sweet but shy girl who would like a quiet and calm home with patient owners who can give her time to blossom. She'd like to be the only pet and live in an adult home.

Peeves, two, is an adventurous boy who is looking for a quiet home as he finds interaction a little scary. He likes to sit near people but will need owners to be patient with him and give him the space to grow in confidence at his own pace.

Nearly Headless Nick is a big lad with an even bigger personality! He's independent and enjoys doing his own thing so would like access to a garden where he can roam and explore. The six-year-old would like to be the only pet in the home but could live with older children.

Fleur Delacour was rescued after being abandoned and, unsurprisingly, can be unsure of new people and places. She'd like a loving home who will give her lots of toys and space to explore.

Helga Hufflepuff is a sweet lady of senior years and is ready to bewitch her new family with her beautiful eyes and her deep, rumbling purr. At 15, she is looking for a quiet home to spend her golden years where she can cuddle up on a cosy bed and enjoy a good fuss. She loves to have company and is very talkative so will make a wonderful companion.

She would like a home with no other pets but could live with older children who will understand to be gentle with her. Due to her age, she's on special renal food and takes daily medication to manage her kidney disease so this will need to continue in her new home.