Our officers were called to an allotment in Ashington, Northumberland, this week after reports rabbits were being kept in unsuitable conditions.

When officers attended the allotments on 11 July they found small, dirty hutches full of rabbits who had been left to breed with each other.

The largest rabbit weighed in excess of 8kg - the same as a medium-sized dog such as a Jack Russell terrier or King Charles spaniel - and had ears that were 7ins long!

Although often kept as pets, Flemish giant rabbits are still bred by some for their fur and their meat and it is believed these rabbits were being bred to be eaten. They have now been signed over into RSPCA care. 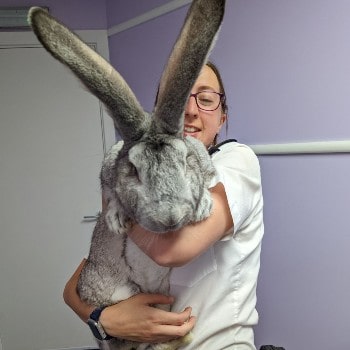 Inspector Trevor Walker, who helped to rescue the rabbits, said: "These poor rabbits were living in cramped and dirty conditions which would have been very unpleasant for them especially in the heat.

"Luckily a vet found they are all in good condition, although one is on medication for weepy eyes and a wound on the back of his neck, but we hope they will soon find loving homes. They will make good companion animals as they have nice temperaments.

"Sadly, rabbits are becoming an increasing problem across the RSPCA as we are seeing more and more coming into our care, many as a result of the cost of living crisis.

"We would really urge people to do their research before taking on a pet and also to make sure you get your pet neutered at an early opportunity to prevent unwanted litters of animals - all of these rabbits will be neutered, microchipped and vaccinated before finding new homes.

Anyone interested in rehoming these rabbits - or any of the other bunnies in our care - can visit Find A Pet to find their perfect match.

Around half of these the rabbits were adults and half were babies; two of the adults were of average size but their litters were crossed with the giant breeds, so the babies will likely grow into larger rabbits than most.

The rabbits have been sent to a number of different centres, branches and licensed boarding establishments across our network, while others are being looked after by inspectors - to make sure they get the best care possible. Many of our centres are sadly already full with unwanted rabbits.

We have launched a campaign as a response to the increasing numbers of calls we see over the summer months - on July 20 the charity received almost 6,000 calls in one day. Our inspectors are working hard to rescue animals in need this busy summer but we need your help to save animals from abuse and Cancel Out Cruelty for good.