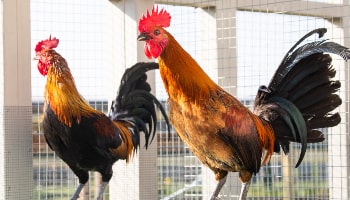 Four dashing cockerels are still looking for their own roosts to rule after they came into our care as part of a flock of chickens who were abandoned in a Kent village.

It's now been almost six months since the four cockerels - Norris, Larry, Rufio and Spike - were abandoned - but unlike the rest of the flock, they still haven't found their forever homes. Sadly potential homes for these four plucky fellas fell through at the last minute.

Six months and still looking for a roost

Now as they reach the sad milestone of six months without a family, we're once again appealing to find them new homes and even arranged a photoshoot for them to show off their handsome features! 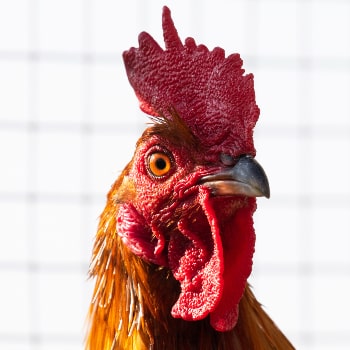 Our inspector Kirsten Ormerod rescued the birds at the time and said:

"I'm really heartbroken for these boys as they have now been in our care for almost six months and although we did have reserves for them, unfortunately, they fell through.

"These boys really do have a special place in my heart and I've regularly visited them to watch them grow and I have loved watching their personalities evolve.

"When we did the photoshoot with them they really did show off their best sides - and as you can see they really are the most handsome fellas.

"They are kindly being cared for by our Kent Isle of Thanet branch but they now need their forever homes where they can continue to thrive. These boys need to be rehomed separately so that they can rule the roost with a flock of hens to call their own.

"Given everything, they've been through these boys really do deserve a second chance and I'm sure there is someone out there who could offer them new homes."

Roosters were abandoned with 13 other birds 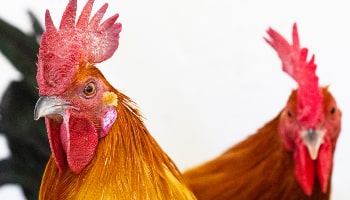 As previously reported, we were contacted by members of the public who found the birds on The Green in Offham on October 21.

Kirsten said at the time:

"The caller initially reported a large number of chickens which had suddenly appeared on the village green, leading us to believe they'd been abandoned. There was a mixture of hens and cockerels, and the cockerels had coloured cable ties around their legs. In total, myself and my colleague, animal rescue officer Brian Milligan rescued 17 birds over a number of days."

If you're interested in offering a home to Norris, Larry, Rufio or Spike please contact our Kent Isle of Thanet branch.

Last year, we dealt with 1,594 incidents related to chickens across England and Wales and have had abandonment incidents relating to 1,562 birds (up to 30 November). We've also taken 280 chickens into our centres for rehoming. Find out more about keeping chickens as pets if you're interested in rehoming a cockerel.