The RSPCA has revealed a significant increase in dogs being victims of cruelty since the start of the pandemic with 10 reports AN HOUR - and this is expected to increase with a spike in reports during the summer.

New figures released today as part of the animal welfare charity's Cancel Out Cruelty campaign show that despite being man's best friend, 92,244 dogs were reported to the RSPCA last year as victims of cruelty. That's 253 a day or more than 10 CALLS AN HOUR - and includes 10,228 dogs reported as beaten. 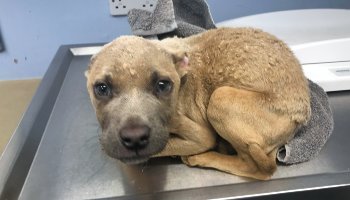 This shows a significant 16% increase since 2020 - when the pandemic took hold - with 79,513 reports of dogs being cruelly treated made to the charity.

With more people becoming dog owners during lockdown, the charity is concerned the number of cruelty incidents involving canines will increase - particularly in the summer when it traditionally sees a surge in calls to its cruelty line.

There are now an estimated 13 million dog owners in the UK - up from 12.5 million the year before and from 9 million in 2020, according to the Pet Food Manufacturing Report, with lockdown causing an unprecedented surge in demand.

The RSPCA receives around 90,000 calls to its cruelty line every month with reports involving all animals, but in the summer months calls rise to 134,000 and reports of cruelty soar to 7,600 - a heartbreaking 245 every day.

To help prevent suffering, the RSPCA has launched its Cancel Out Cruelty campaign, which aims to raise funds to keep its rescue teams on the frontline, saving animals in desperate need of help and raising awareness about how we can all work together to stamp out cruelty for good.

Every year, we see many dogs coming into our care bearing the physical and mental scars that were inflicted at the hands of the very people who were meant to keep them safe and love them unconditionally.

We're supposed to be a nation of animal lovers and dogs are 'man's best friend' as the saying goes, but in reality we receive many cruelty reports every day about dogs who have suffered the most unimaginable cruelty. A 16% increase of dogs being cruelly treated in a year is really concerning.

Our officers have dealt with all sorts of horrific incidents including dogs repeatedly beaten, stabbed, burned, drowned, poisoned, and some who have been left to die from starvation.

With the public's help in reporting cruelty, they've been able to save many dogs from ongoing abuse. Sadly though, in some cases, others have died at the hands of their tormentors and it's then our job to try and bring some justice to the victims.

During the summer we see a rise in cruelty and this year as we've seen such a massive increase in dog ownership since lockdown, we're bracing ourselves for even more reports.

We believe there are a number of factors that mean summer is our busiest time. Perhaps there's boredom or pressures at home with children being off school which can make existing difficulties magnified.

This year the cost of living crisis has added a further dimension and we could see people really struggling to care for their pets which may lead them to lash out. We could also see more animals than ever being abandoned or given up.

All these factors mean that we need the public's support more than ever to help Cancel Out Cruelty. As a charity, we're ready to tackle a summer of suffering but we can't do this without your help. We rely on public support to carry on our rescue, rehabilitation and rehoming work.

The RSPCA needs your help to rescue more dogs like these 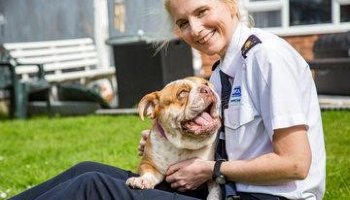 At just 18 weeks-old Daisy had already suffered fractures to two legs, her hip, four ribs and her jaw had been fractured twice. The injuries were caused at different times in a series of attacks by her previous owner and were left untreated.

She was rescued following reports from a concerned member of the public. After undergoing surgery and receiving treatment for her injuries Daisy continued on her journey back to health and was rehabilitated by the RSPCA who found her a forever home where she could start a new and happy chapter in her life.

Bruce had horrific scalding burns and was dumped in a park 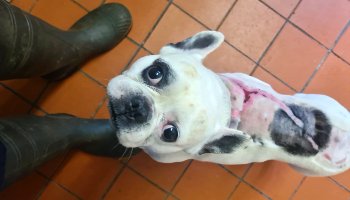 French Bulldog Bruce was found shivering and terrified, with horrific untreated burns across his body in a bush near a park in Preston.

A member of the public took the eight-year-old dog to their local RSPCA branch and staff gave emergency treatment for Bruce's painful burns across his back. It's thought these injuries were already two to three weeks old, meaning that Bruce had been suffering for quite some time already.

Bruce underwent an operation and specialist treatment to remove scar tissue. He spent weeks recovering and was looked after by dedicated branch staff and has since been rehomed and is now loving life thanks to the RSPCA.

Puppy dumped inside a rucksack 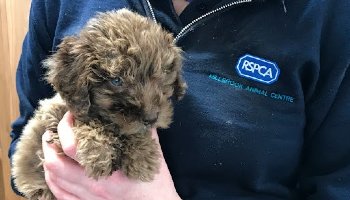 Watson the tiny chocolate-coloured cockapoo puppy was found abandoned in a rucksack in Berkshire woodland.

Witnesses saw him being dumped in a rucksack in Finchampstead Woods on February 10 and rushed him to a nearby vet. The vet reported the matter to the RSPCA and Waston was taken into the care of a local branch. 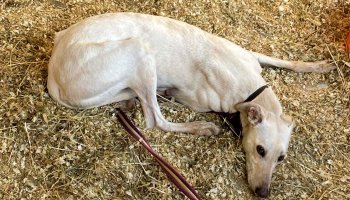 The underweight lurcher was cruelly abandoned by hare coursers who left her for dead near Scunthorpe.

Nyah collapsed through exhaustion while under the control of a group of men who were pursuing the illegal blood sport in the area.

The men drove off and left her for dead in a field, where she was picked up by a local resident who was watching the incident and called the police. She was taken into the care of the RSPCA where she was put on a special diet to restore her back to her normal body weight.

Terrified puppy with two deformed legs dumped in a park 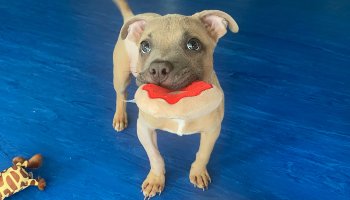 A lovely male bulldog-type pup, now called Chance, was found by a dog walker in a bush at the side of a footpath close to the back of Kirkdale Cemetery, near Seeds Lane, in Liverpool in February.

The terrified and emaciated pup was rescued and rushed to RSPCA's Greater Manchester Animal Hospital for emergency veterinary care as he was found to have two deformed legs and was unable to move from the spot where he was abandoned. His legs have now been corrected and he has returned to a healthy weight and has been adopted.

These included reports of:

Our frontline teams are working hard to rescue animals in need this summer but we can't do it alone - we need your help to Cancel Out Cruelty.

If you can't donate, there are other ways you can help cancel out cruelty, from volunteering with the RSPCA, holding a bake sale or fundraiser, or taking part in the #50MilesForAnimals challenge.