As the microchipping of horses becomes compulsory this month, we fear it won't be enough to prevent an impending horse welfare catastrophe. 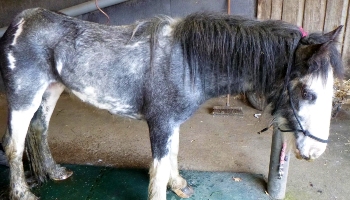 As we launch our month-long rehoming drive, Adoptober, we're revealing the number of horses in our care is already three times what it was at the start of the last recession (2009). Now we're braced for huge numbers of abandoned and neglected horses as the country plunges into an even deeper financial downturn.

Although we welcome the change in the law to make microchipping of all equines mandatory irrespective of age, as it is for dogs, we're warning the move isn't enough alone to tackle irresponsible breeders and owners at the heart of the equine crisis, which has now raged for eight years.

At the same time, many animal welfare organisations have seen donations plummet during the pandemic, and there's already huge pressure on resources. Animal welfare charities received no specific financial help during lockdown and we're calling on the government to give financial support to the sector for its vital work during one of toughest years in our history.

"New legislation demanding compulsory microchipping of all horses irrespective of age is set to come into effect in England this month; currently around 70% of the horses we rescue are not microchipped.

When it came in for dogs, the number of strays reduced by 20% in four years, but unfortunately, we just don't think that's going to happen for horses. Without rigorous enforcement and tough financial penalties, there's little to stop irresponsible horse owners continuing to breed and dump their animals. Local authorities, who are in charge of the enforcement of equine identification regulations, are already operating with extremely limited resources and are facing the huge challenges of Covid, the recession and Brexit.

"The RSPCA and other equine welfare organisations have been struggling to pick up the pieces of the horse crisis since the last recession and as we enter what could be the biggest financial downturn of a generation, the sector is already bursting at the seams and facing unprecedented challenges due to the pandemic.

"Equine charities fear that autumn will create the perfect storm as grazing decreases, the end of furlough and the deepening recession will see more owners struggling with costs of care leading to neglect and abandonment, yet people have been continuing to breed horses despite Covid. Alongside this, equine rescues, already reporting a sharp drop in funds, may start to go under as the financial situation bites, which will increase the burden on the RSPCA. We're calling on the Government to step in with financial support as they have for other charities affected by the pandemic and recognise that the vital services provided by the animal welfare sector are under huge strain."

Equine charities donations have dropped by over half

A recent Covid crisis impact survey by the National Equine Welfare Council and Association of Dogs and Cats Homes revealed nearly two-thirds of equine rescues reported a greater than 50% drop in donations to the equine rescue charity sector, leaving the majority of organisations reporting that they only had funds for six months or didn't know how long their funds would last.

How the horse microchipping law helps

"The Animal Welfare Acts are excellent tools to support both prevention of equine suffering and intervention when this has already occurred, but to be effective we need the owner of the horse to be identified - otherwise the only option for animal welfare charities is to treat the animal as abandoned, which incurs a huge cost to organisations relying solely on donations from the general public to carry out their work.

"Since equine identification legislation has come into effect, and especially now that all equines in England should be microchipped from 1 October onwards (from 12 February 2021 for Wales), we have the tools needed to associate all equines with an owner. But the system is in its infancy and is also playing catchup with a large number of equines not properly documented.

"Local authorities, not animal welfare charities, have the power to enforce the regulations. NEWC are very keen to launch conversations with them about how we can work together and support them in their bid to gain the capacity to do this work, so that we see the welfare improvement that these equine identification changes promise."

"Microchipping laws have helped councils to reunite stray dogs with their owners and we urge horse owners to comply with the new law and ensure that microchip details are kept up to date to help improve animal welfare.

"Microchipping not only reduces the huge cost to the public purse, it also reduces fees for unplanned stays in kennels or stables as microchipped animals can be returned to their owners more quickly than those which are not microchipped and typically take longer to trace.

"The pandemic has exacerbated pre-existing pressures on councils' regulatory services, which in many places are now at a tipping point. We want to work with the government ahead of the Spending Review to ensure councils have enough funding to maintain vital trading standards and environmental health services, as local authorities continue to lead local work to tackle COVID-19."

We responded to 5,444 incidents concerning horses since the pandemic lockdown began in late March, and it's estimated by equine charities that there are as many as 7,000 horses currently at risk of abandonment and neglect in England and Wales.

Last year we rehomed 246 horses, but almost 760 remain in our care to date, desperately needing new homes. At the time of the last recession, we've had 250 horses in our care in 2009, but following that downturn, numbers peaked at nearly 1,200 in 2013.

Just last week (22 September) a pony 'riddled with maggots' was found abandoned in a straw field in Northwich, Cheshire.

Our inspector Pamela Bird was called to help the gravely ill pony and said:

"Members of the public had spotted the Blagdon cob and were concerned about her weight and that she was struggling to walk.

When I arrived I could see how skinny she was. She had terrible flystrike and was riddled with maggots. She was very quiet and shut down. It was heartbreaking to see her in such a sorry state."

The 12hh grey roan pony - nicknamed Tuesday by our staff taking care of her - is thought to have been around three to four years old. She was taken into our care and given veterinary treatment but vets found her blood test results showed she was very sick and said it would be touch and go for the filly.

"Someone had left Tuesday to get into this state and, instead of getting her the treatment and help she badly needed, simply dumped her in a field and washed their hands of her. It's disgraceful.

"Vets did the best they could for her but she wasn't eating and was getting sicker and sicker. Sadly her body gave up the fight and she died.

We're currently appealing for any information about the pony to help officers investigate.

We have riding and companion horses in our care

Our equine staff are appealing to experienced horse owners across England and Wales to consider rehoming a rescue horse if they possibly can. This month as our rehoming campaign Adoptober launches, we're keen to showcase the versatility and capability of the horses we rescue, whether they're ridden horses, companion animals or youngsters with heaps of potential.

Throughout the month of October, we're shining a light on animals in our care which need a new home and promoting the benefits of adopting a rescue animal through our Adoptober campaign. We're the UK's biggest rehomer, finding 39,178 homes for pets last year - that's 107 a day, or four an hour.

Coronavirus has changed our rehoming process

Under the current Covid rehoming protocols, anyone interested in fostering or adopting an animal from us should look at our Find a Pet to see which animals are available near you. You should also check with your local rehoming centre for the current application process in that area.

Due to the amount of interest we are receiving and the impact of Covid on our staffing levels, please bear with us as our centres are very busy at this time. To find out more please visit our coronavirus page.