As the Great British September Clean kicks off, we're urging people to 'snip the straps' from disposable face masks, as we reveal that we've helped more than 900 animals caught in litter since the start of lockdown. 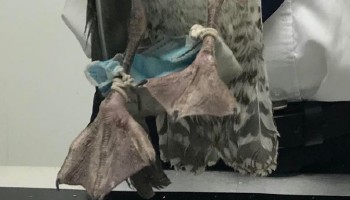 Dumped face masks have become a new hazard to wildlife since the pandemic started and we've received reports of animals tangled in the ear straps of single-use masks since it became law for the public to wear them in shops. One such incident includes a gull who was found to have a face mask tightly round his legs in Chelmsford, Essex.

Despite the face mask causing swelling to his legs, the bird has now fully recovered - but it's just one example as to how dangerous face masks can be to animals.

This message comes as we back Keep Britain Tidy's Great British September Clean, which kicks off on 11 September and runs until 27 September.

Since lockdown started on 23 March, we've dealt with 938 incidents of animals caught in litter, including tin cans, elastic bands and plastic bottles.

Animals are susceptible to getting tangled up in facemasks

For many years the public have been aware of the message to cut up plastic six-pack rings before throwing them away to stop animals getting tangled in them, and now we are keen to get out the message that the same should be done for face masks too - as very sadly, animals are susceptible to getting tangled up in them.

Now that face masks are the norm, and may be for some time to come, this message is more important than ever as thousands of these masks are being thrown away every day. We're concerned discarded face masks could become a significant hazard, particularly to wild animals and birds.

Our RSPCA officers have had to rescue animals from getting tangled in face masks and we expect that this may go up as time goes on, so the best thing to do is to simply cut the elastic ear straps in half before throwing it away.

Other recent litter-related incidents which we've dealt since the start of lockdown with include:

Dispose of your rubbish responsibly

Most cases of litter affecting animals are preventable if rubbish is disposed of properly and responsibly. 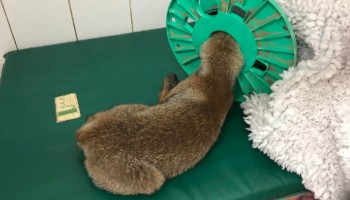 Animals looking for food can get trapped in tin cans and the sharp edges can cause injury. We encourage people to clean and empty food containers before pinching them shut or cutting them in half before putting them in the recycling.

Elastic bands also pose a big risk to small animals and birds as they can wrap around their bodies or beaks and cause choking and other injuries. We encourage people to reuse them where possible or cut them open before throwing them away.

Broken glass can cause serious injury and small animals can get trapped in jars and bottles so please clean and recycle glass as much as possible.

Plastic bags can suffocate animals or, if they eat them, can cause them to choke or can block their digestive system. Please tie bags in knots before recycling. And plastic can holders can cause deep wounds to animals that get tangled in them or can even choke them so it¿s best to cut the loops before discarding.

Our top tips to protect wildlife from litter: