Dedicated expert staff took care of 13 snake eggs to help them hatch after the death of their mother.

A female grass snake was rescued by a member of the public in Three Oaks - on the outskirts of Hastings, East Sussex - on 13 July after they grew concerned for her welfare due to some injuries to her scales. They took the snake to our experts at Mallydams Wood Wildlife Centre where vets checked her over.

Vet Jo Mihr said: "She was very lethargic, thin, had a broken rib and small wounds to her face and body. When we were assessing her I thought I could feel eggs inside so we x-rayed her and spotted 13 eggs. 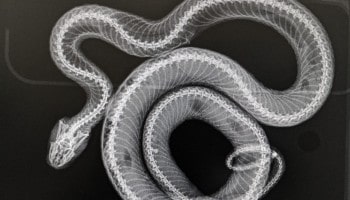 "The following day she laid her clutch but this left her even weaker and she deteriorated over the coming days. We took her eggs away shortly after they were laid; grass snakes will normally lay somewhere warm like a compost heap and don't look after the eggs afterwards so we tried to replicate that and ensure the best outcome for the eggs.

"Sadly, despite our best efforts to help the female, she wasn't improving so we made the difficult decision to put her to sleep on 19 July.

"We were really sad that she hadn't made it. Laying her clutch must have drained her of what little remaining energy she had left. But we still had the unhatched eggs and we knew the babies still stood a chance."

This then left the staff with the tricky job of trying to create a suitable environment to nurture and warm the eggs so they would hatch. Vet Jo oversaw their care for eight weeks until they started to hatch. She added:

We put the eggs into a moss substrate on an adjustable heat pad to keep their environment humid and warm. We monitored the temperature closely and kept it between 23C and 26C.

After 56 days, the first egg hatched on 6 September and 11 more followed over the coming week, leaving one that sadly remained unhatched. 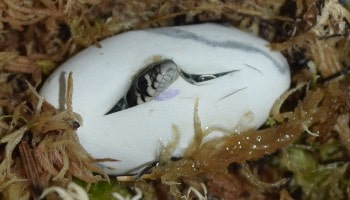 Staff checked the 12 hatchlings - or snakelets - and they were given clean bills of health so they were released on Monday 13 September at a special site near Bexhill.

"One of our wildlife assistants carries out reptile surveys at the site and we knew it was a great habitat for them and would give them the best chance at survival," Jo added.

The grass snake - or Natrix helvetica - is widespread in England and Wales, and they can often be seen in gardens. They are usually an olive green colour with large eyes and round pupils and can grow to be over 1m long. They are the only native species that lays eggs.