We've welcomed reports that the UK Government is considering banning the use of "cruel and indiscriminate" glue traps in England. 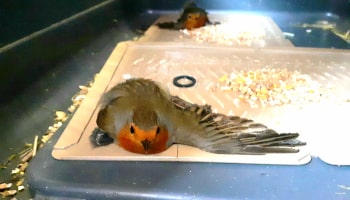 Reports in the Telegraph suggest the UK Government is considering an "imminent consultation" with a view to banning the use of glue traps.

The traps - also known as glue boards or sticky boards - trap animals on a sheet of cardboard, plastic or wood coated with non-drying adhesive, or in a shallow tray of adhesive.

Sadly, in attempting to pull themselves free, animals may rip out patches of fur, break bones or even gnaw through their own limbs to escape.

Animals caught by the devices can often be trapped for prolonged periods of time - and can experience pain, distress and severe suffering. Unattended animals can die slowly from dehydration, starvation or exhaustion.

"Sadly, our frontline officers too often see the misery and suffering these glue traps cause animals.

"When animals are stuck, they begin to struggle to free themselves and can cause themselves horrible damage.

"Simply, the use of glue traps is totally unacceptable. They're indiscriminate in what they catch; with wild birds and even household pets often falling victim.

"It's really positive to hear reports that the UK Government is considering a consultation looking at an outright ban on glue traps in England. We'd urge them to outlaw these devices as soon as possible to help protect animals from the very serious welfare issues they too often cause."

In March, two robins were rushed to our Oak and Furrows branch wildlife centre in Cricklade after being found stuck on a glue trap in Lydiard Millicent in Swindon.

Staff at the centre were able to remove the robins from the trap using coconut oil and butter - but sadly both birds died following their shocking ordeal.

In Bromsgrove, in mid-March, a buzzard was spotted with his wing stuck to a glue trap near Ye Olde Black Cross pub on Worcester Road. Fortunately, the exhausted buzzard managed to free himself from the trap - and was closely monitored by us as he recovered from the incident.

The indiscriminate nature of the devices means - sadly - even domestic pets can fall victim. Last November, a cat was found trapped in an alleyway in Cricklewood Lane in north London, horribly stuck to four glue traps. Tragically, horrific injuries to the cat meant the feline ultimately had to be put to sleep - despite emergency treatment.

Any animal caught in a glue trap is protected under the Animal Welfare Act 2006 - while it's an offence under the Wildlife and Countryside Act 1981 to intentionally trap, injure or kill wild birds using glue traps. However, it can be very difficult to find out who has set a trap; and the devices are widely available online, in garden centres or DIY stores to those who may not be familiar with the law.

Glue traps are supposed to be checked regularly by those setting them - but sad incidents like those dealt with by us show this often isn't the case. We're urging the UK Government to ban glue traps as soon as possible, to help other animals avoid the potential pain, suffering and death caused by the devices.

We already contact retailers selling glue traps urging them to remove them from their stock.

"While we hope an outright ban on these devices in England isn't far away, sadly glue traps are still widely available at the moment; and often to people who aren't aware of the law surrounding animals.

"We'd urge anyone who sees these traps for sale to forward the details onto us, and we'll contact the store highlighting the dangers these devices pose to animal welfare and calling for them to be removed from stock to prevent problems occurring."