An emaciated dog with sores on his body found tied to a tree near Manchester is recovering from his ordeal in RSPCA care. 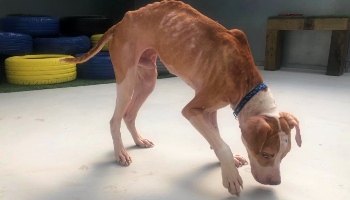 The frightened dog, named Murphy by rescuers, was found at around 7am on Saturday 3 April in Hurst Wood near Clifton Country Park in Radcliffe.

The American bulldog-cross was so emaciated that his spine and ribs were visible. He also had pressure sores on his hips and ankles, and a rash all over his body.

The member of the public who found him rushed him for urgent veterinary treatment and he is now recovering from his ordeal at the RSPCA Preston and District branch, where he has put on more than 1.5kg (3.3lb) in weight in two weeks.

Mark Allen, the branch manager, said: "Murphy weighed just 16.6kg (approx 2st 9lb) when he arrived, around 10kg (approx 1st 8lb) under the weight he should be for a dog of this breed. 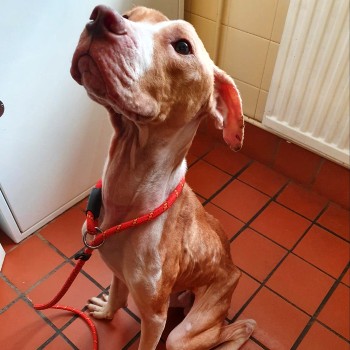 "He's now on a special diet to help him gain weight, which he's doing, however this is going to be a long process as the physio will be to build him up. Once he's recovered from his ordeal we'll find him a new home.

"He's a lovely young dog, aged between one and two, who's been severely neglected in his short life.

"We suspect he's been kept squashed in a small cage where he didn't have the space to move or turn around because of the nature and locations of the sores."

RSPCA appealing for information to find out who is responsible

RSPCA inspector Jess Araujo, said: "I'm keen to trace the person who neglected and starved poor Murphy before tying him to a tree and simply walking away. 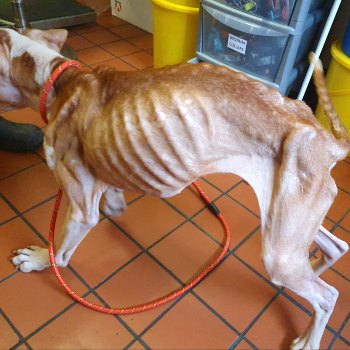 "It's heartbreaking that there are irresponsible people who simply don't care for their pets and dump them like rubbish when they no longer want them.

"I'm appealing for anyone with any information on who owned Murphy to get in touch as he's a distinctive looking dog and I feel someone must know something.

"I also would like motorists in the area at the time to check their dash cam footage and for any residents nearby to also check their CCTV as I feel the owner lived fairly close to where Murphy was dumped and knew the area."