Coronation Street actor Harry Visinoni has told of the moment he went to brush his teeth in the bathroom of his home and was left sss..shaken when a four-foot long snake appeared on the toilet! 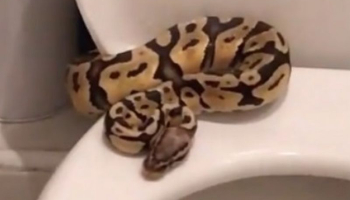 The actor, who plays Seb Franklin, saw the colourful snake poking her head from behind the toilet in the Hale home he shares with his girlfriend Ellie Isaac just after midnight on Saturday morning.

Harry - who's used to a soap opera but perhaps not a drama in his bathroom - said it took a few moments for it to sink in just what he had seen!

He quickly made a clean getaway from the room - firmly shutting the door behind him - and told Ellie what had happened.

The couple went back in the room and watched in disbelief as the Royal Python slithered onto the toilet seat - which they caught on video.

I was just brushing my teeth and saw what looked like a snake head pop from behind the wall at the back of the toilet.

I didn't take it in at first and then looked again and realised what I had actually seen so I left the bathroom quickly and closed the door.

We went back in and watched as the snake then slithered onto the top of the toilet and sat on the seat just looking at us.

The pair left the room to decide what was the best course of action to take and when they returned to about an hour later there was no sign of the snake.

Harry used some cardboard and stuck it to the wall near the hole which went into the cavity wall near where the snake appeared. He then closed the bathroom door putting a draft excluder at the door to stop the reptile venturing any further.

This snake was a little feisty

After a sleepless night - in which Harry admits dreaming about the snake - the pair contacted us and our animal rescuer Sonia Hulme was sent to the scene.

She managed to locate the Royal Python, which are a fairly docile species but can bite when threatened, behind the radiator in the bathroom.

It's thought the female snake had belonged to the previous owner of the flat who sadly died a few months ago and she must have escaped.

"She was quite feisty and really didn't want to come away from the radiator - so I managed to unscrew the top part and as it dropped forward.

"Harry caught the radiator and I managed to hold the tail of the snake using a pillowcase covering my hands which I safely managed to get her into.

"I thought it was quite apt that this Royal Python was found on the throne - and as she's a female we thought it would be appropriate to call her Lulu.

"We suspect she escaped months ago and probably lived in the wall cavity - but thankfully snakes can often survive with long gaps between meals. She's in really good condition and is certainly feeding well now."

Lulu is now in our care where she'll be looked after by a specialist reptile keeper.

We were so grateful to the RSPCA who came out really quickly and the inspector was great at getting the snake out safely. We really support what the charity does and we are pleased Lulu is now in safe hands. 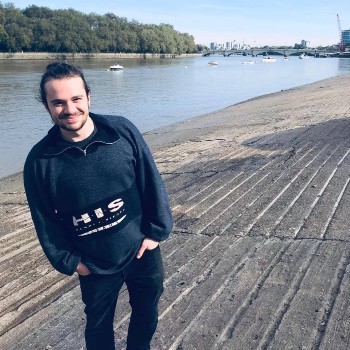 Harry has appeared in Coronation Street since October 2016 as builder Seb, the son of mechanic Abi Franklin.

His character has faced some tough situations and he went through the trauma of losing his younger siblings after his former drug addict mum decided to give up the twins.

Many of the snakes that our officers are called to collect are thought to be escaped pets.

We would always recommend owners invest in an enclosure suitable for the particular species and that the enclosure is kept secure (and locked if necessary) when unattended to prevent accidental escape.

It's possible to microchip snakes and we would recommend that owners ask their exotics vet to do this, so that snakes can be easily reunited if lost and found.

In the wild, royal pythons are found in West and Central Africa where they live in grasslands and forests.

We would always recommend that anyone who sees a stray exotic snake - to keep a safe distance, call our helpline on 0300 1234 999 and monitor the animal until we can get there.

This winter, we expect to rescue thousands of animals from neglect, cruelty and suffering. Already at Christmas we received more than 44,000 calls to our cruelty line. Help our rescue teams continue to reach the animals who desperately need us this winter.