A man has pleaded guilty to animal welfare offences after his brother filmed him kicking and hitting a cat and posted it online.

Kurt Zouma appeared at Thames Magistrates' Court on Tuesday 24 May following an investigation into a video that was posted on social media. He pleaded guilty to two offences under the Animal Welfare Act 2006 of causing unnecessary suffering to two cats.

His brother, Yoan Zouma - who filmed the attack and posted it on social media - also appeared at court where he pleaded guilty to one offence of aiding, abetting, counselling or procuring Kurt Zouma to commit an offence, under the Magistrates Court Act 1980.

We launched an investigation after the video, posted on Snapchat by Yoan Zouma on 6 February, was reported. The upsetting video showed Kurt Zouma chasing a cat around a house, kicking and slapping him. 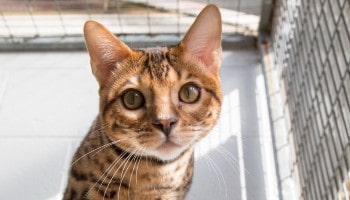 On 9 February, Kurt Zouma's two Bengal cats were seized by police and taken to be examined by a vet. It is not clear which cat was seen on the video being attacked. They were then taken into our care where they've remained since.

In his statement, he added: "In my opinion, the force of the kicking into the abdomen of a cat and the slapping of the cat to the head, both of which were with force, as seen in the video recording would have without any doubt in my mind have cause soft tissue trauma, pain and discomfort to the cat (or cats) on the day but any evidence of that soft tissue trauma would be very unlikely to have been found three days later.

"I have no doubt that Kurt Zouma knew or would be expected to know that kicking a cat into its
abdomen would cause or was likely to cause pain, discomfort and distress or worse injuries¿ It is my opinion that there can be no justified reason to treat a cat or cats in this manner."

The court heard that Yoan Zouma uploaded the video of his brother onto social media with laughing emojis.

Hazel Stevens, prosecuting on behalf of the RSPCA, told the court that the cruelty seen in the video was 'shocking' and 'disgusting'.

Both cats were signed over by Kurt Zouma at court so will soon begin their search for a new home. 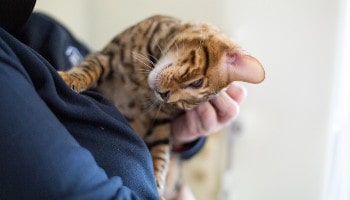 In mitigation, the court heard both brothers had received abuse and threats online. The court also heard that Kurt Zouma had been fined £250,000 by his club, West Ham United.

Speaking after the hearing, chief inspectorate officer Dermot Murphy said: "It's never acceptable to treat an animal in this way and we were shocked when the video was first brought to our attention.

"What makes this case even more sad is the way the video was filmed and shared, making light of such cruelty.

"We hope this case will serve as a reminder that all animals deserve to be treated with kindness, compassion and respect, and that we will not tolerate cruelty."

The case was adjourned for reports. Kurt and Yoan Zouma are due to appear back before Thames Magistrates' Court on 1 June for sentencing.

*The cats are not yet available for rehoming. Please do not contact the RSPCA's national cruelty line or our rehoming centres to enquire about them as you may prevent an emergency call from getting through.