A campaign to stop people behaving irresponsibly near marine animals such as seals, dolphins and nesting birds is being rolled out nationally by the RSPCA, the police and other partner organisations. 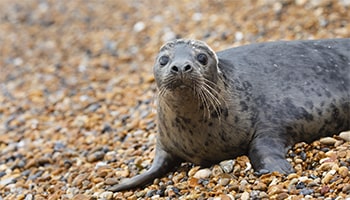 As the UK's staycation season kicks off, Operation Seabird launches its national campaign (Friday 4 June) amid reports of irresponsible behaviour towards wildlife around Britain's coastline.

Common disturbances to wildlife include speedboats, kayaks and paddleboards deliberately getting too close to seals, dolphins and cetaceans. Sadly this often causes stress to the animals and can result in the females suffering spontaneous abortions or babies being abandoned by their mothers.

Other issues include dogs off leads disturbing nesting birds or seals, litter including plastic rings severely injuring seals, wild camping beach barbecues and camp fires causing significant damage on the beach and quad bikes or 4x4s vehicles riding over nesting areas. There have even been incidents where beachgoers have got too close to wild animals for the sake of a selfie. Users of boats and other watercraft can also cause severe injury to some marine mammals if they collide with them while trying to watch them.

The national campaign - piloted in regional hotspots in 2020 - aims to raise awareness and educate people about how vital it is not to disturb the mammals and birds of Britain's coastal areas and to enjoy watching them from afar.

"We want people to enjoy watching our marine wildlife but this should be done at a safe and sensible distance without disturbing the animals.

"Every year, the RSPCA's wildlife centres have to treat and rehabilitate a wide range of wildlife - including seals and seabirds - which have been injured or orphaned due to human disturbance.
For example, last year, in a particularly shocking incident, members of the public had to be held back by a cordon to stop them trying to take selfies and distressing an injured seal who was recovering on a beach on Hayling Island, West Sussex.

"If people have concerns about an animal, they should keep their distance and contact the RSPCA helpline on 0300 1234 999."

As the holiday season begins, high visibility patrols by the RSPCA, local police forces and wildlife groups will target coastal areas where people and animals interact, such as beaches with seal colonies, dolphins swimming offshore or sites with nesting seabirds.

Locations initially targeted will include:

Protecting habitats animals live in too

"The Yorkshire coastline is a fantastic landscape that¿s an important feeding and breeding ground for a variety of seabirds and marine mammals.

"This valuable asset not only attracts visitors to explore the beaches and cliffs, but also attracts those wishing to explore the coastal waters themselves. Unfortunately, we have a number of reports each year of members of the public on the water, approaching too closely to the wildlife that live in the area including the nesting seabirds and marine mammals.

"The disturbance of these important species can impact on the success of their breeding and also cause cetaceans in particular, high levels of stress, which could lead to future issues such as stranding and injuries through impact with water craft.

"Operation Seabird is a multi-agency partnership operation to educate the public about the importance of the resident wildlife and the impact that these disturbance events can cause. The aim is to ensure that members of the public, who are using the waters along the Yorkshire coast, do so in a responsible way.  We want to ensure they keep their distance from the wildlife to prevent intentional disturbance and to safeguard this stretch of coastline, allowing future generations to enjoy the spectacle we see today."

Dog attacks can kill seals, as well as posing a risk to the dogs themselves from bites that can become infected from the bacteria that live inside a seal's mouth. Seal pups disturbed by curious people will move off into the sea, using valuable energy which they need to survive and grow. Birds such as little terns travel thousands of miles to breed in very specific UK coastal points. They have one annual chance to nest and produce young, but if disturbed this opportunity is lost, and due to their ground nesting habit they are particularly vulnerable to dogs, and careless feet.

"While our beautiful beach and coastal areas are great to have fun in, they are natural habitats and breeding grounds for many native and migratory animals, including several species on the endangered list. We humans share this space, and we can easily and unwittingly cause disturbance, fear, and distress.

"For many tourists it can be surprising and exciting to see marine mammals, including seals and their pups which will normally rest on the beach at various times of year, as well as ground nesting birds which are usually resident between March to September. But as tempting as it is to approach them, we would respectfully ask that everyone stays at a distance and keeps their dogs on leads and under control.

"Our message is to 'Observe, Don¿t Disturb' as people visit Britain's wonderful coastline."

Report any deliberate disturbances to the police

Operation Seabird was launched in 2020 by North Yorkshire and Humberside Police along with the RSPCA, Yorkshire Marine Nature Partnership and Flamborough Project, RNLI and wildlife trusts. Its national rollout is being supported by the government's Marine Management Organisation (MMO).

Anyone who has witnessed deliberate and intentional disturbance of wildlife and their habitats should contact the Police on 101, quoting Operation Seabird.