A youth football coach who left his French bulldog with untreated ear masses - one of which was so severe it could have been growing for up to a year - has been sent to prison for eight weeks and banned from keeping all animals for life. 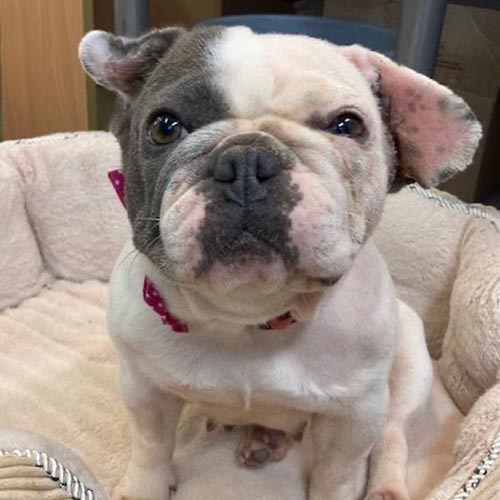 Cortez Marvin Belle, of Newport, was sentenced on 30 December following an RSPCA prosecution. He had pleaded guilty to one offence of causing unnecessary suffering at an earlier hearing this month.

Newport magistrates said that the case of "prolonged neglect" was so serious that it crossed the threshold for custody. Belle said he couldn't afford to pay for three-year-old Tinkerbell's treatment. The court was told how she had two litters of puppies previously, with the dogs selling for £1,500 each.

The court heard that RSPCA animal rescue officer (ARO) Isobel Burston had visited Belle's home on 11 August this year following concerns about his dog. She described smelling "rotting flesh" as soon as she walked into the property and seeing a tennis ball-sized growth tangling out of Tinkerbell¿s left ear.

In her evidence to the court, ARO Burston said:

I have seen something similar to this previously and knew that was where the bad smell was coming from. I knelt down to look closer. The growth looked wet and had debris and hair stuck to it in some areas, and open sore looking yellow patches underneath.

Belle told the officer that he had taken Tinkerbell to see a vet about six to eight weeks previously but had been told she would need very expensive surgery which he couldn't afford, and that his ex-partner had cancelled the pet insurance following the breakdown of their relationship.

Tinkerbell was taken to a vet by the RSPCA later that day. She was examined and found to be in a poor bodily condition, with her spine and ribs visible and a tucked appearance at the waist.

The vet who treated her said:

The growths looked polyp-like and these polyps had invaded both of her ear canals, leaving no obvious ear canal for hearing; at this point I imagine she is almost deaf.

On the left ear, attached to the inner ear polyp there was another mass, this was attached via a stalk. The mass was approximately 20 by 20 centimetres in size, cylindrical in shape and hanging from the ear polyp.

This mass was grossly infected and ulcerated in places and was also weighing that side of her head down, causing a head tilt. 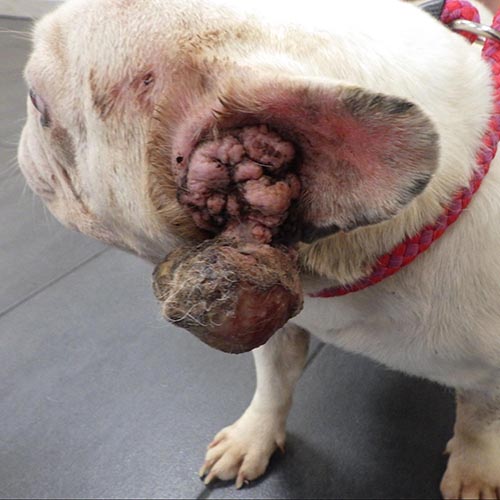 The vet said that the inner polyp masses would have taken at least three to six months to get to the size that they were, whilst the mass attached to the polyp on the left ear was so severe it could potentially have been growing for up to a year.

RSPCA inspector Gemma Cooper, who investigated the case for the animal welfare charity, interviewed Belle on 16 August. He told her there had been ongoing issues with Tinkerbell's ears in the two and a half years he had owned her - including the times when she had given birth to two litters of puppies - and that he had been given antibiotics and steroids by a vet to treat her. He said his insurance policy would not cover the £6,000 he had been told it would cost to operate on one of Tinkerbell's ears.

After the hearing, inspector Cooper said:

I'm very pleased that the court recognised the seriousness of Tinkerbell's neglect. Belle had every opportunity to seek veterinary treatment or help from various animal charities across South Wales, but he didn't.

His inaction resulted in Tinkerbell suffering for months and she is now permanently deaf as a result.

Belle, who the court heard is a youth football coach and a railway worker, was also ordered to pay costs of £420 and a victim surcharge of £128. In mitigation he said was experiencing mental health problems and expressed his remorse and regret about what had happened, saying he did not seek to blame anyone but himself.

Tinkerbell was cared for at an RSPCA animal centre for several months. Unfortunately her health started to deteriorate, and sadly, she was recently put to sleep on veterinary advice.