A blind dog with severely matted fur was found dumped helpless at the side of a canal in Greater Manchester prompting an RSPCA investigation. 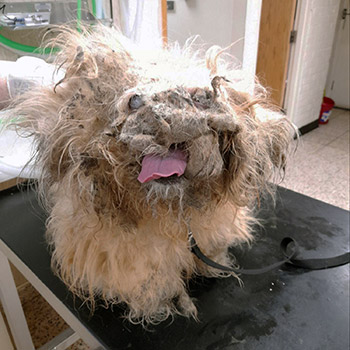 A man out walking came across the male Shih tzu dog near the Ashton Canal, at Portland Basin, in Ashton-under-Lyme, on Friday, March 25 and thought the pet was dead as he was in such a poor condition.

But when he looked closer he could see the neglected dog was breathing but was terrified to move so he took him home to help him recuperate.

After a week he realised the dog was in urgent need of further treatment so he took him to a nearby vets and the matter was reported to the RSPCA.

Inspector Ryan King collected the dog, thought to be around six-years-old and now named Ashton after the place where he was found, and rushed him to Greater Manchester Animal Hospital for emergency veterinary treatment.

Ryan said: "When the man who found Ashton first came across him he was laying next to a bench near the canal; as he wasn't moving he thought the poor pet was already dead.

"But on closer inspection he realised he was breathing but his fur was so heavy and matted he appeared unable to move and he was obviously terrified.

"Vets at the animal hospital later found he was blind in one eye with glaucoma and had very little sight due to cataracts - so it is not surprising the poor dog would have been too terrified to move from where he was abandoned. 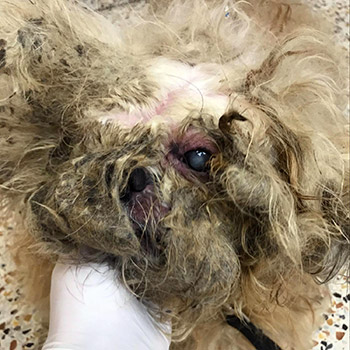 "Sadly it looks like both eyes may have to be removed to prevent further suffering - although vets will do all they can to save the eye with cataracts.

"While also at the hospital staff had to shave off 1.3 kilograms of matted fur - which was 10% of his overall body weight - as this was preventing him from moving and causing him suffering.

"Thankfully he is doing well in himself and will remain in RSPCA care while he recuperates."

Ben Faulkner, manager at Greater Manchester Animal Hospital, said: "This poor dog was in a terrible state with matted fur and blindness which meant he was struggling to move.

"Our team immediately set to work on shaving off the matted fur and he seemed much happier afterwards.

"Sometimes matting can cut off blood supply to limbs and in some cases dogs left in this state have had to have amputations. Fortunately this was not the case although the dog had overgrown nails and one was curling into the paw pad which would have caused considerable suffering.

"He was also found to have multiple eye conditions which will require further examinations and possible removal and had ear infections in both ears which he is now receiving treatment for."

Anyone with information please let us know 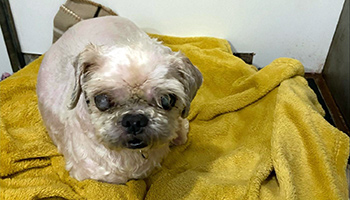 Ryan said the dog was found on the afternoon of Friday, March 25 and he is now keen to find the owner of Ashton, who was not microchipped, and is appealing for anyone with information to contact him.

He said: "Ashton was clearly neglected and it appears that instead of seeking help for their pet the owner decided to dump him and left him in a very vulnerable position as he couldn't see or walk - he would have been terrified in such an unknown environment."

Ashton will now receive further treatment and once he has fully recuperated he will be found a new home.

Anyone with information which can help the investigation should call the RSPCA appeal line on 0300 123 8018.