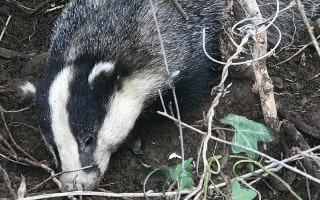 A badger has been returned to the wild after being saved from a snare in Ceredigion - with the animal's rescue and release caught on video.

We were alerted after the badger was spotted laying down and struggling to move in shrubs and hedgerow at a location in the West Wales county.

Our Inspector Jemima Cooper arrived to find the badger entangled in a snare around his chest. During the rescue on 19 March she faced a "difficult task" of safely securing the badger while freeing him from the vegetation; as the animal running off with the snare still attached could have had fatal consequences.

We are opposed to the manufacture, sale and use of all snares and any traps which cause suffering - which we feel are "indiscriminate" and "cruel". While the use of snares is not currently illegal, it is illegal, under the Wildlife and Countryside Act, to set a snare for a badger and, under the Protection of Badgers Act 1992, it is an offence to injure, kill or take a badger, except under licence.

A large amount of rehabilitation needed

The badger was first taken to a local veterinary where he was sedated and the snare was removed. His chest was extremely sore, bruised and swollen - but the snare had, thankfully, not cut through layers of his skin. He was put on a course of antibiotics, as well as pain relief and anti-inflammatory medication.

As rehabilitation continued, the badger had to be sedated for a second time on 26 March as an antibiotics course continued, due to a wound which was not fully healed. Funding for the second sedation was provided by our Ceredigion Branch.

Fortunately, after a successful period in rehabilitation, the badger was fit and well enough to be returned to the wild on 3 April.

Our animal rescue officer Ellie West, who helped the badger during his rehabilitation, said:

Snares are totally indiscriminate in nature - and this badger was the latest victim of these devices, which we have long wanted to see banned.

My colleague Inspector Jemima Cooper had a hugely difficult task securing this badger while cutting back massive amounts of vegetation - but thankfully we were able to get him out of there and onto treatment and a spell of rehabilitation.

While this badger was badly injured - and needed to be sedated twice - thankfully we reached him soon enough to be able to save him. But had he spent more time in the snare, the consequences could have been so much worse.

It was important this badger had a spell in rehabilitation, and was closely monitored - as we know animals caught in snares can have issues surrounding pressure necrosis or wounds breaking down many days later.

Happily we were able to secure another happy ending for Wales' wildlife - with this badger returned to the wild on 3 April.

After a few sniffs of the ground after coming out of the cage, he darted off into the undergrowth and was no doubt very happy to have a second chance of being back home - and, hopefully, safe from cruel snares.

We were so pleased to be able to help with the treatment and release of this poor badger, who had a lucky escape after a run in with a nasty snare.

Many people associate the work of RSPCA branches with pets - but we're also passionate about the rich, vibrant wildlife in Ceredigion and were happy to be able to support the RSPCA in this badger's hour of need.

Should you wish to support us with work such as this, you can donate online.