A woman from Stoke-on-Trent whose "neglect" and "insufficient care" led to her dog becoming emaciated and covered in lesions has been banned from keeping all animals for three years following a prosecution by the RSPCA.

The defendant, Ms Martin, was also given a 12-month community order when she appeared before magistrates at North Staffordshire Justice Centre last week. She'd previously pleaded guilty to one count of causing unnecessary suffering to her dog, Poppy, at an earlier hearing last month. 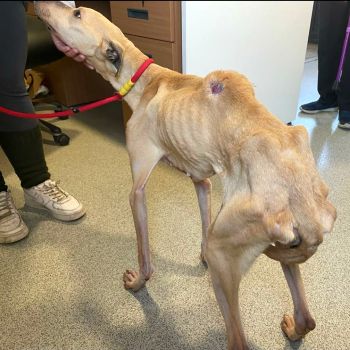 The two-year-old lurcher/whippet cross was so underweight that a vet who examined her said she had a body condition score of only one out of nine and could have eaten the tip of her tail due to extreme hunger.

Poppy's since made a good recovery in the care of Cheshire-based charity Alsager Animals in Need - who initially feared she might not survive the night - and is now looking for a new home.

The court heard how Ms Martin had taken Poppy to a vet on 12 January and told him that she had lost a significant amount of weight over a one to two-week period. She said multiple skin lesions had also appeared at the same time, whilst the large abscess on Poppy's back had developed over two days.

Ms Martin told the vet that Poppy was fed well enough with food including milk and meat even though she was showing signs of disorientation and wobbliness.

The vet recommended that Poppy should have blood tests to rule out any significant medical reasons that were causing her condition. Ms Martin stated she was unable to afford it and would prefer to have her dog put to sleep and signed Poppy over.

The RSPCA was subsequently contacted and Inspector Natalie Perehovsky interviewed Martin, who told her that a lack of finances was the main reason why she had not sought veterinary help sooner.

A second vet who examined Poppy on 13 January said:

The most significant and dramatic changes affected Poppy's skin. Due to poor muscle mass, the skin over all her bony elements (mostly pelvis) was lacerated and the tip of the tail was missing. It's not clear whether the tail injury happened due to trauma or was self-inflicted (due to extreme hunger). The coccygeal vertebrae (the bone inside the tail) was also exposed.

The most obvious abnormality was a large abscess on Poppy's back, over her thoracic spine. This was about 5cm in diameter, filled with fluid and uncomfortable when touched. The skin in the abscess area was necrotic.

I have no doubt that Poppy experienced unnecessary suffering, as a consequence of her owner's neglect and insufficient care. Suffering in this case could easily be avoided by providing adequate nutrition and veterinary care.

Poppy experienced hunger, lack of protection from danger (as she was exposed to other dogs who injured her) and lack of veterinary care. There was no underlying health issue that could result in these changes.

In addition to the three-year ban and a 12-month community sentence, Ms Martin was also ordered to pay £600 in costs. Two other dogs that she owns are being rehomed.

It was clear from Poppy's grave condition that she had not been receiving appropriate care for some time. We would always urge people who are in financial difficulty to reach out for help as there are many organisations that can offer support. It's wonderful to see the huge improvement in Poppy, thanks to the wonderful care she has received from the team at Alsager Animals in Need, and I hope someone will come forward to offer Poppy a wonderful new home.

We were very concerned that Poppy wouldn't make it through the night when she first came into our care, and she's battled a number of other health issues since, including a perforated eardrum, two partial tail amputations, the removal of two cysts on her teats and on-going issues with her skin.

But throughout all of this she's been the perfect patient and never complained once. The light has really come back into her eyes and her loving temperament wins over everyone who meets her. She loves being stroked and fussed, she's just a real sweetheart. 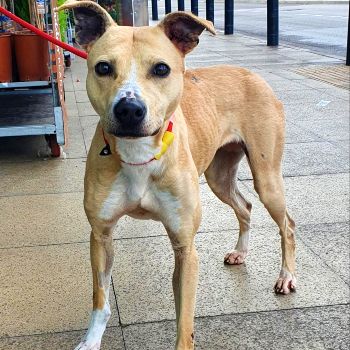 Hilary Baxter, animal welfare co-ordinator at the charity, said: "It's been a team effort to get Poppy to where she is today and we'd like to say a big thank you to the veterinary team at Alsager Vets4Pets and all the staff at the kennels for the wonderful care and love they've given to Poppy whilst she has been in our care."