Two sentenced for neglect of 21 dogs

Two sentenced for neglect of 21 dogs

A man and a woman from Wales have been handed a suspended prison sentence and disqualified from keeping dogs for 10 years after they neglected 21 dogs.

They appeared at Swansea Magistrates Court on Friday 11 February after both pleading guilty to three offences under the Animal Welfare Act; caused unnecessary suffering to 12 dogs by failing to provide adequate or effective professional veterinary care and attention for their skin diseases; failing to meet the needs of 21 dogs by failing their need for a suitable living environment; and failing to provide 10 dogs with suitable diet including continuous access to an adequate supply of clean, fresh drinking water. 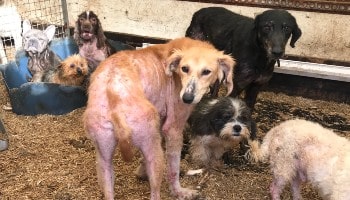 While sentencing, the District Judge referred to there being a commercial element on what appeared to be a puppy farm. The court heard neither of the defendants had a breeding licence.

When our officers visited the site in March 2021 - as part of a South Wales Police warrant - the 21 dogs were found living in unhygienic and hazardous conditions.

I was horrified by the animal's overall health condition and the environments in which they were being kept. It also appeared that a small scale puppy farm was being run from this location.

At the location there were three litters and a heavily pregnant bitch, who later went on to have six puppies.

She added: "The conditions the dogs were kept in were not acceptable and the owners were failing to meet their needs.

"One pen for example - which had eight dogs in - had no space for them to get away from each other, had no comfortable area for them to rest, and was full of urine and faeces.

"Pens lacked sleeping areas and, in one pen, a head lamp was placed dangerously as it hung very close to a water bowl. Temperature control was lacking in all the pens as was clean, comfortable bedding and all the pens looked and smelt dirty. 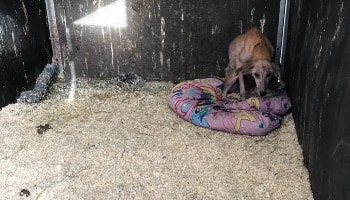 "Also there were no sufficient beds and water bowls for the number of dogs to prevent competition and all the adult dogs needed veterinary treatment for various ailments.

"When bringing the dogs out of the first two pens none of them knew how to walk on a lead and they were all terrified of the outside world. It was clear from their reactions that they have not been properly socialised and spend the majority of their time locked up in these pens and away from life."

One person was handed a nine-week prison sentence on each charge to run concurrently, which was suspended for 12 months, a rehabilitation activity requirement of 15 days, ordered to pay a £120 fine and a victim surcharge £128, and was disqualified from keeping dogs for 10 years.

The second was handed a nine-week prison sentence on each charge to run concurrently, which was suspended for 12 months, a 10-day rehabilitation activity requirement order and was ordered to undertake 120 hours of unpaid work, ordered to pay a £128 victim surcharge and was also disqualified from keeping dogs for 10 years.

The dogs have transformed and found their forever homes

Several of the dogs were taken to West Hatch Animal Centre, in Somerset, while others were taken to our other centres for rehabilitation and rehoming.

One of them, Flo, was in a thin condition and had mange when she was rescued. On her first day at West Hatch she was subdued but showed her playfulness by picking up a rag toy and trying to play even though she looked like a skeleton.

At the animal centre she went from strength to strength and her personality shone through more each day. 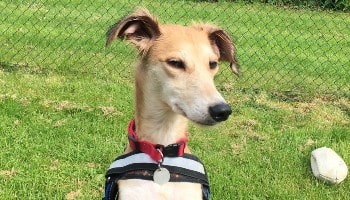 Inspector Cooper added: "When I first saw her she was extremely underweight and cowered in the corner. Her ribs and spine were visible and she looked pink where she had fur loss and her skin was red and inflamed. There were two bowls on the floor of her pen which were empty.

"I am delighted that Flo found her forever home - her transformation is just amazing.

"Thanks to a lot of love and care from staff at the animal centre all of the dogs have transformed into happy and healthy dogs and it is lovely to know they are in their forever homes."

See all of the dogs in our care who are waiting for new homes by heading to Find A Pet.