We received 10,000 reports of firework incidents

We received 10,000 reports of firework incidents

This year we received 10,694 reports of firework incidents from concerned animal owners. An online reporting page, set up specifically for fireworks for the first time this year, has allowed worried owners to report issues directly to us.

Of the responses, 96% said their animals felt fear after neighbours let off private fireworks with no prior warning. 87% of these responses related to dogs, 22% to cats, 7% to small furries and 6% to horses (some people who have used the reporting system may own more than one animal).

We also received 64 calls to our cruelty line to report fireworks-related issues in November alone.

One of our branches, Oak and Furrows Wildlife Rescue Centre in Leigh, Wiltshire, received a report of a terrified deer running in circles in a field - with fireworks being let off right next door. The call came in from an owner of some horses also in the field as they had gone to check on them fearing they would be spooked.

The young roe deer was found running in panicked circles because the fireworks were scaring him. He had his head stuck in a fence and was blind with shock - he had also ripped both antlers out.

Anj added: "One of our animal carers, along with a vet, brought him into the centre and gave him pain relief, anti inflammatories and antibiotics for the wounds to his head and eyes. 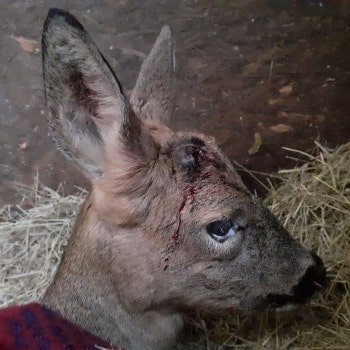 "He is otherwise quite plump and in good condition, however the next few days will be crucial as deer often succumb to a disease called captive myopathy which is caused by extreme stress and rescues lose many deer to it. He will be kept quiet in our stable and he is currently resting with a lot of soft bedding to keep the pen as safe as possible for him while he can't see.

This situation is obviously going to compromise him in the wild as he has lost his antlers, hopefully they will grow back but it won't be this year. We are hoping his eyesight will return to normal, as this can be a side effect of shock for deer."

"It's very frustrating for those of us who look after animals to see the effects of fireworks, and especially those which are set off totally irresponsibly near animals," Anj added. "If people do want to set them off we would urge them to use common sense and to make sure they are well away from any animals, especially those kept outside."

Campaigns manager Carrie Stones said: "Sadly this year we have again heard many distressing stories of dogs, cats, horses and wildlife left in fear due to fireworks. Whilst it is encouraging to see that supermarkets are selling low noise fireworks and some local councils are now setting their own guidelines, this shows us that we still have a long way to go.

"We have heard of dogs going missing after running away in fear and some owners having to leave their homes to go to a remote location once the fireworks start up to try to calm their animals down."

Please, if you are planning to use fireworks as we head towards Christmas and New Year, be courteous to your neighbours - use low noise options and let them know in advance.