It's true what they say: never work with animals! Our officers never quite know what they're walking into from one job to the next.

We rescue more than 110,000 animals every year - often called out to shocking, upsetting and disgusting incidents of animal cruelty and neglect. But our rescuers are also on the frontline when it comes to helping animals who find themselves in a spot of bother - and these can often be rather amusing! 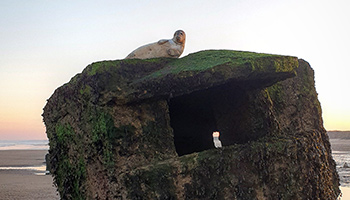 An injured grey seal stumped our rescuers, who were called to collect him from the top of a 10ft high World War Two pillbox, on Fraisthorpe Beach in Yorkshire's East Riding on 26 February. Our animal collection officer Leanne Honess-Heather and deputy chief inspector Claire Mitchell arrived after Scarborough Sea Life Centre requested help. The Centre had been called by a concerned member of the public, who reported that the seal had been stuck for over 24 hours.

The poor seal was clearly distressed and we could see he had injured his eye. The sheer sides and height of the pillbox made the rescue quite a challenge. We managed to manoeuvre him into a net and, supporting his weight between us, carefully lowered him.

He received veterinary treatment and was returned to the wild the following day. 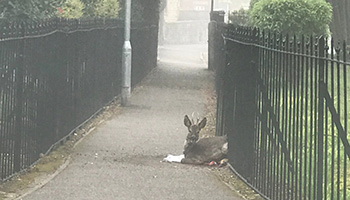 A male roe deer found himself in a spot of bother when he got stuck in metal railings. The deer was spooked by a passing jogger on 29 April and got trapped in the fence around St James' Churchyard in Barlborough, Derbyshire. The runner called us and so animal collection officer Caitlin McNaughton attended and called Derbyshire Fire and Rescue Service for help. She said:

The poor deer was quite distressed so we had to work quickly to free him which we did in a few minutes. He was uninjured and as soon as the fire service had prised open the bars he ran off - which was great to see.

Slow worm in the air vent 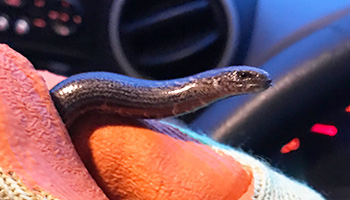 A woman enjoying a bath had a fright when she spotting a slow worm poking his head out of an air vent!

Our animal collection officer Ellie Jones went to the home in Bristol on 11 June to the 'snake' trapped in the vent. Ellie said:

It was a slightly tricky rescue as we had to free him with the bathroom lights switched off. When the light was on it activated the fan in the vent and we didn¿t want the slow worm to get injured. Thankfully I was able to wriggle him free and he wasn¿t any worse for wear so I was able to release him in a field nearby. 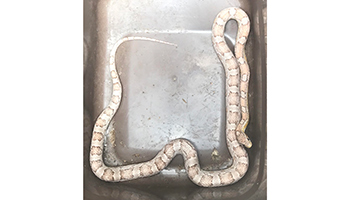 A woman had a surprisssssse after opening her kitchen drawer to find a snake inside!

She called a neighbour who alerted the police and we were called in to help. Our animal collection officer Rachel Edwards went to the house in Marlow, Buckinghamshire, on 7 July to collect the corn snake, who was thought to be an escaped pet. 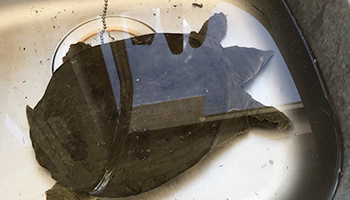 Rolls-Royce staff were shell-shocked after finding a turtle wandering through their Technology and Logistics Centre in West Sussex.

The employees discovered the turtle exploring the HGV yard and managed to confine him in a box and put him into a water-filled sink. Our animal collection officer went to collect the Chinese softshell turtle on 2 July from the warehouse in Bognor Regis.

It's a turtle mystery how this little guy got into the warehouse! The centre is in the middle of nowhere so I haven't a clue where he¿s come from.

It's believed the turtle had been abandoned in a pond nearby, before making his way onto the industrial estate. Claire took him to another animal centre for specialist care. 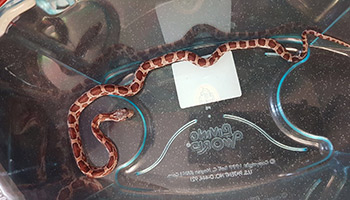 We launched an investigation after a baby snake was abandoned in a takeaway tub in McDonald's. The three-week-old corn snake was found by a member of staff at the Middlesbrough fast-food chain on 6 July.

We believe he was abandoned by someone who couldn't provide him with the care he needed. Unfortunately, this is something we often see happening with exotic pets such as reptiles.

The snake was taken in by a specialist. 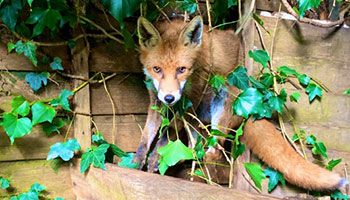 An embarrassed fox needed a helping hand after getting stuck in a tangle of ivy hanging from a garden fence. Our animal collection officer Cara Gibbon went to the Solihull garden on 17 October. She said: 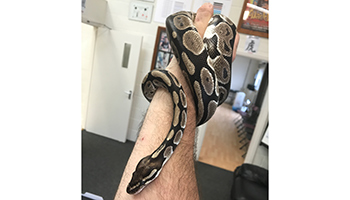 Parents of a five-month-old were horrified when they found a 1m-long python slithering around their daughter's nursery in Tadworth, Surrey.

Our animal collection officer Louis Horton went to collect the royal python on 7 August and soon discovered he belonged to a neighbour and had been missing for three months.

It turns out he was called Gozer the Gozerian - named after Ghostbusters - and belonged to the family's neighbour.

He'd pushed the air vent out in his vivarium and managed to squeeze out the tiny gap! We're not sure how he got next door but he has been known to push doors open by rubbing up against them so he may have pushed his way out of the room and through the cavity wall to next door's house. 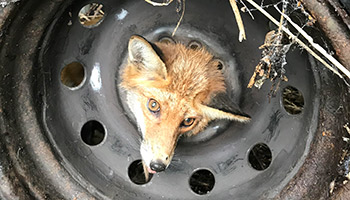 Storage centre workers in Bristol found a fox with his head stuck in the middle of an old tyre. Our officers moved the stricken fox on 4 October to Bristol ARC where staff used veterinary lubricant and rubbed it all over his head and neck to slowly and carefully manoeuvre him out.

The fox - nicknamed Michelin by staff - was taken back to the area he was found and released. Our inspector Alan Barnes - who helped with the rescue - said:

Michelin was very lucky to have been spotted in the undergrowth otherwise it could have been an awful demise for him. I'm so thrilled his story had such a happy ending and we were able to work so quickly, as a team, to free him and get him back into the wild. 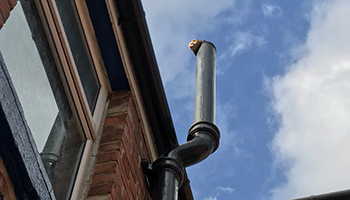 Along with the fire service teams, we were called to Bishop Auckland, County Durham, on 9 April to rescue a ferret who got stuck in a waste pipe - at the top of a two-storey building! The ferret - nicknamed Lucky - was found with her head poking out of the top of the pipe.

The caller heard scuffling noises when she went into the bathroom and her cat was going crackers in there. When she went outside, she spotted the ferret's head just peeking out of the waste pipe two-storeys up! We have no idea how the ferret got there or where she had come from.

The fire brigade came to rescue Lucky and she was taken to a ferret rescue home. 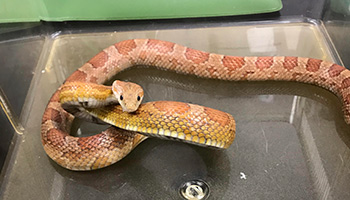 A Cardiff taxi driver had an unexpected passenger on board, after discovering a corn snake under the bonnet of a taxi.

The driver contacted RSPCA Cymru on 11 October and an officer went to collect the snake, which was just beneath the bonnet. Fortunately, despite being a little underweight and cold, the snake had no major welfare concerns and was taken to specialist facilities for boarding.

This was certainly one of the more unusual calls I've dealt with recently, with a bright orange corn snake found under the bonnet of a taxi!

Seal at top of a cliff 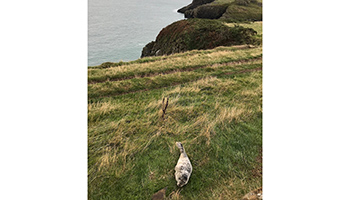 A young seal found herself in quite an unusual predicament on top of a 50m-high sea cliff at Abercastle. A member of the public spotted the one-month-old seal pup on 29 September and called us.

This was quite an unusual place to find a seal as she must have travelled some distance and up a steep incline to get there. However she got there, she was very much lost and unsure where she was going.

She was moved to Welsh Marine Life Rescue (WMLR) and then taken to our Stapeley Grange Wildlife Centre in Nantwich for rehabilitation.

Help us to continue rescuing (no matter how bizarre they are!) and rehabilitating animals in 2020 and donate online.