null We rescue four kittens abandoned in the scorching sun

We rescue four kittens abandoned in the scorching sun

We're caring for four kittens found abandoned in a cat carrier down a country lane during the scorching heat on Friday 31 July. 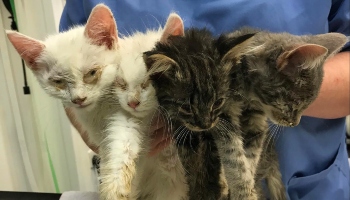 We were alerted to the incident by the police, and our Animal Welfare Officer Siobhan Trinnaman attended the location in Curtis Mill Lane, Romford.

"I'm appalled that these kittens have been deliberately abandoned especially as it was 35 degrees where I picked them up. We are just grateful that they were found when they were and that the caller waited with them. The kittens could have easily died in this box in this heat, the poor things.

"The poor little mites, they were so thin their spines were prominent and they're full of flu and all had sticky gunky eyes, so I took them straight to the RSPCA Harmsworth Memorial Animal Hospital where they will be kept in isolation while they're treated.

"The kittens are quite poorly at the moment and being treated for flu symptoms, with a couple having to supplement feeds and fluids."

The kittens were found by a member of the public who had spotted the black and cream coloured cat carrier on the side of the road. We've been told that from the way the carrier was found the finder believes it could have been thrown out of a car.

The four kittens are believed to be around 12 weeks old and they are three girls and one boy, two are white and two tabbies.

We're appealing for information and would urge anyone who may know who owns the kittens or has any information in regards to this incident to contact our inspector appeal line on 0300 123 8018.

Temperatures are set to rise in the UK this weekend, make sure your pets are protected from the heat during the summer months.

To help us keep rescuing animals like these and keep our animal hospitals and centres running for emergency treatment and round the clock care through these unprecedented times, please donate online.