We're caring for a feral kitten rescued from a glue trap

One of our inspectors is fostering a little kitten who had become stuck on a glue trap at a farm in Norfolk.

The little ginger kitten who has been named Rodney had been found stuck on a glue trap at a farm in the North Norfolk area and was freed by a farmer who then contacted us.

Inspector Emily Astillberry collected the kitten on July 22 and took him to Companion Care Longwater branch in Norwich who then set about removing the glue from all his fur.

This poor boy was most likely a feral cat and only about five weeks old so really too young to be without his mum. He was thin and lethargic and clearly distressed by what had happened to him.

The staff at the vets were amazing and spent all day gently washing and shaving away his glued fur. He had been stuck on the trap on his left-hand side and his left ear and tail had taken the brunt of the sticky damage.

We named him Rodney and I'm currently caring for him with my family. He's such a lovely boy and has certainly bounced back now, following his ordeal.

Glue traps are extremely cruel and cause unnecessary suffering to animals caught in them, whether they are the target species, like rats or mice, or a beloved pet or wild animal. Animals caught in glue traps, in attempting to get free, may rip out patches of fur or feathers, break bones and even gnaw through their own limbs to escape, which is just awful.

Luckily Rodney didn't have any lasting injuries - but had he not been found he could have suffered a very long and painful death.

Rodney will remain with Emily and her family until he is old enough to be rehomed by us. 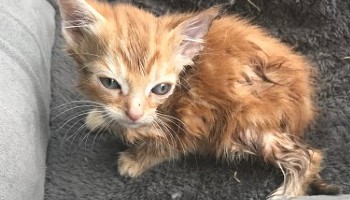 There were 243 glue trap incidents reported to our cruelty line in the last five years (2015-2019) involving animals including cats, garden birds, hedgehogs, squirrels and even a parrot.

Glue traps, also known as 'glue boards' or 'sticky boards', consist of a sheet of plastic, cardboard or wood coated with non-drying adhesive designed to trap rodents such as mice and rats as they cross the board. We oppose the manufacture, sale and use of glue-traps because of the unnecessary suffering they cause to animals. They are also completely indiscriminate in which animals they trap so they pose a danger not only to the rodents they are intended to catch, but to pets and other wildlife too.

In the last five years we've received 243 reports involving glue traps and less than 27% of animals involved in these incidents were rodents. A whopping 73% of incidents involved pets and wildlife.

The harsh reality is that if trapped animals are left unattended they will die slowly from dehydration, starvation or exhaustion. Unfortunately, despite all of this, the use of glue traps is not illegal and there is currently no prospect for legislation to ban them.

However, the RSPCA urges people never to use glue traps, and to opt for humane deterrence of rats and mice which is often the only long-term solution for rodent control. Essential measures include limiting food availability, rodent-proof food containers and bins, decluttering, keeping storage areas tidy and blocking access holes using sealant or mouse mesh.

The figures from the last five years show that we received 13 reports in which cats had become stuck to a glue trap and seven incidents involving exotic pet snakes, as well as other cases involving dogs, pigeons, owls, ferrets and even a parrot. Victims of these traps have suffered horrendous injuries, many of which have been fatal.

Despite a code of practice which states that the distributors of these traps should not supply them to people who are not properly trained to use them, this is having little effect as these traps are still openly available to the public through hardware stores, garden centres and other retailers. The instructions accompanying the traps are often inadequate or poorly written too.

As part of our 'Wild animals and glue traps project' we're asking that anyone who sees glue traps on sale to the general public gets in contact at wildlife@rspca.org.uk with:

We will then write to the retailer and ask them to stop selling glue traps, remove all glue traps from their stock and avoid re-stocking them - to prevent the problem recurring. The project has been very successful and many stockists have taken these traps off their shelves.

For more information on humane deterrence consult our 'living with mice and rats' factsheet.