From abandoned and suffering, to happy in a new home, Jack (the 15-hand chestnut gelding) is a great example of the journeys rescue horses often face.

The 'miraculous transformation' horses can achieve after being rescued is perfectly highlighted by Jack, who is now settling into his new forever home in Shropshire.

Jack had been abandoned and was extremely emancipated 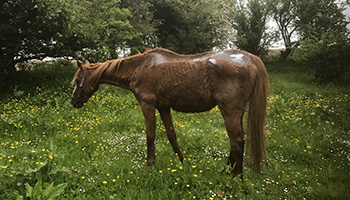 Jack is a veteran 15-hand chestnut gelding who is proving a perfect companion to animals and humans alike at his new home in North Shropshire.

However, Jack looked a very different horse when he first came to the attention of our inspectors in May 2018.

Jack had been abandoned with serious welfare concerns at stables in Furnace, near Llanelli, without the consent of the land-owner.

Our inspectors Rohan Barker and Nigel Duguid arrived and found the horse to be emaciated, and in urgent need of help.

This poor horse had been mysteriously dumped at stables in Furnace, in Llanelli, in a really bad way.

His ribs and spine were visible, and he was badly emaciated. Veterinary examination confirmed that he was suffering. It was just miserable to witness.

Jack was seized and taken into our care

The horse was seized by Dyfed-Powys Police, and taken into our care, before heading to a boarding establishment in the Swansea area.

Poor Jack underwent many months of rehabilitation and care; including time under the stewardship of equine expert Juls de Smet, who looked after Jack for around ten weeks as part of his recovery.

He's such a friendly, easy horse, who was no trouble at all. He clearly appreciated us tending to him and helping him get better.

We found Jack to be such a sweet, genuine horse who was easy to treat and medicate. Such a gorgeous boy. It's just such a great shame he had been left in such a horrendous state.

It looks to me that as poor Jack was getting older, someone thought he wasn't good enough anymore and just dumped him. It's just so cruel.

Jack is the perfect addition to the family 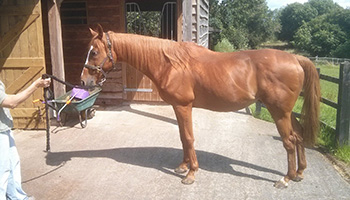 Jack was eventually adopted by Tina, and is now living in her yard in North Shropshire. Her family had recently been struck by great sadness but Jack helped turned their fortunes around, as well as his own.

Sadly, the family saw two of their horses die within a ten-week period in 2018, leaving a third horse on her own and without companionship.

However, Jack has proven the perfect addition to their family. Tina was full of praise for both the work of our hardworking team, and the role that rescue horses can play as companions.

Tragically, we lost two of our horses within just 10 weeks. It was an awful situation, and we were left with one horse, suddenly all on her own and lonely, having lost both her mother and friend within weeks. We were all so upset.

We were desperate to get some new company for our mare - initially moving three sheep in next door to stave off our lonely horse's unhappiness. That's when we called the RSPCA, and they were so helpful.

They soon found Jack, who'd they rescued some months earlier in South Wales.

Jack initially moved in with us on a trial basis, and immediately was an amazing companion. He was a fantastic addition at such a stressful time, when we were under real pressure to find another suitable horse.

Jack's rehabilitation has continued in his new home

His rehabilitation has continued with us - the weight he's put on, his beautiful shiny coat and his fantastic personality are a far cry from how the RSPCA found him in Llanelli.

I'm so grateful to the RSPCA, who were just brilliant. I'd say to anyone - if you've got the right facilities, money, experience and space - rescue horses can make the most fantastic companions. After what they've so often been through, they deserve happiness, security and comfort.

We completed the formal, final adoption of Jack a couple of weeks ago - and it really was one of the best decisions we've made.

Dozens of rescue horses are available for rehoming in or around Wales. We hope to continue to transform the lives of horses rescued from incredibly difficult situations and find them loving new families.

Our equine welfare manager for Wales and the Midlands, Gareth Johnson, said:

Jack's story shows the miraculous transformation rescue horses can go through. From being dumped heartlessly in Llanelli and in an awful condition, to making the perfect companion to humans and animals alike - many, many miles away in Shropshire - this has been some journey for Jack.

We have dozen on horses looking for forever homes

There are dozens of other rescue horses in our care in and around Wales and we'd love to introduce the equines in our care to prospective adopters across Wales. From ridden adult and companion horses to youngsters who will need bringing on in their new homes, people can start their search for a rescued horse today.

Visit Find a Pet today and look for your perfect match.