We're urging pet owners to act now if they want to avoid being turned back at the border when travelling to the EU later this year with their cat or dog. 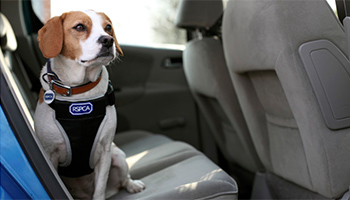 As the Government warns that pet passports could take four months to be processed if the UK leaves the EU without a deal this October, we're strongly recommending that pet owners start their applications now.

Once the UK leaves the EU, current pet passports will not be valid for travel to Europe and a new type of passport will have to be applied for.  But if the UK is no longer recognised by the EU as a 'trusted country', essential checks such as rabies testing could take an additional three months to complete, meaning there could be a four-month wait for pet passports to be processed.

Getting the necessary documents could take much longer now

"Anyone who plans to travel with their dog or cat after the end of October 2019 should be talking to their vet right now.

"For the past fifteen years, it has been very simple to take a pet abroad but many pet owners don't realise just how lengthy and complex the process could now become if we leave the EU without a deal.  Getting the necessary travel documentation for pets could take much longer than at present - up to four months. And without the right paperwork, pets and their owners risk being delayed or even turned back at borders. Additionally, travel with your cat and dog will only be allowed through a small number of designated ports rather than anywhere as is the case at present."

Making plans to travel with your pet

The government has issued advice on making plans to travel with a pet in a no-deal scenario, including:

An opportunity to improve animal welfare

We believe that Brexit provides the UK government with many opportunities to improve animal welfare. For example, if the Common Agriculture Policy (CAP) was replaced with a new system of farm support payments, this would incentivise farmers to protect and improve animal welfare standards.

"This means recognising all animals are sentient, a ban on free trade agreements that import products with lower welfare standards as well as improvements in key areas of animal welfare, such as long-distance transport, food labelling, trade of endangered species and puppy imports."

Pet travel to Europe after Brexit

How to prepare for travel with your pet to any EU country whether the UK leaves the EU with or without a deal.