Share this...
Five tawny owls settle into temporary home after appeal for fosterers 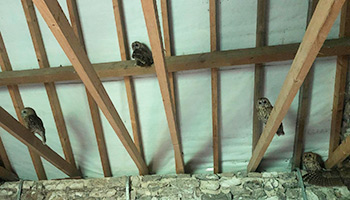 Five tawny owls have been given a foster home in Derbyshire's Peak District after an appeal was launched to find owl fosterers.

The young owls were being cared for at our Stapeley Grange Wildlife Centre, in Cheshire, after they were all found orphaned in separate incidents.

But as our wildlife centre started to fill up, the team began the search for animal-lovers who could temporarily care for the owls - ahead of their release back to the wild - giving the centre more outside aviary space to move animals from their isolation ward outside, where they have more space to stretch their wings.

An appeal in local media led to a foster home being found for five of the young tawny owls.

The owls have been relocated to a barn in the village near Ashbourne, where they'll be looked after by a local family for up to three months before they are released back into the wild.

It is very rewarding for animal-lovers to know they are playing a part in the rehabilitation of animals, particularly wild animals which you don't always get an opportunity to see.

We were pleased to be able to take these five tawny owls to their new temporary home, where they will be fed and looked after by the fantastic family who came forward with a suitable barn.

We are always looking for suitable spaces for any future tawny owls which come into us. Ideally, the tawny owls will go to an enclosed barn which has a natural light source coming in. It really is a fantastic opportunity for animal-lovers. It is very hands-off as it is imperative that the owls remain wild but it is still so worthwhile watching them grow and then go back into the wild where they belong.

Could you foster owls?

This year is a big year for Stapeley Grange, as it's our centre's 25th anniversary. Over this time the team will have helped over 130,000 wild, domestic and exotic animals. You can follow Stapeley on Facebook or Twitter @RSPCAstapeley to find out what events are planned to celebrate this achievement. You can also sign up to Stapeley's quarterly newsletter.

Your donations help us investigate complaints of cruelty, rescue animals from suffering and neglect, care for them and find them loving new homes. If you would like to you can donate online.