Fight to save blind pony left for dead on nature reserve

We're battling to save a pony who was left for dead in a nature reserve in Norfolk. 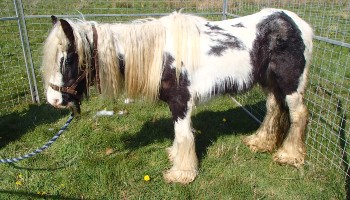 Nightingale was abandoned in a nature reserve in Great Ryburgh, Norfolk, in April and was rescued by our inspector Jason Finch. She was left on grassland and the concerned landowner contacted us to help.

We along with a vet, a field officer and rescuers from Redwings - attended and managed to round up the pony using pen sections - before taking her to a private boarding facility for urgent treatment.

Abandoned and left to die

Jason said: "Nightingale had been left to die. We were shocked at how emaciated she was and she was clearly terrified by her ordeal.

"We think she is aged between 10 and 15 years old and she was very skinny and blind in one eye. She had diarrhoea and she also has a sinus infection which caused discharge from her nose and she had an awful smell coming from her mouth.

"She just seemed so dejected and her spirit was flat, who knows what this poor mare had been through in her life.

"Her condition is worrying and only time will tell if she has enough fight in her to get better. She's on a course of antibiotics for her infection - but if it doesn't clear then she will require further treatment which could include x-rays and a sinus flush."

Nightingale has  been wormed and the worms she passed were the length of a human hand.

We're all hoping she has the strength to fight and that the infection can be brought under control. She's so very sweet and nervous, it's tragic that she has been just dumped in a field to die because she is no longer of value to whoever owned her previously.

The people caring for her say that they are seeing small signs of improvement with her and she's starting to eat a little now as well, but we do have to take one day at a time.

Nightingale will remain in our care and receive on-going veterinary treatment. If she's strong enough to pull through she has been offered a home at Redwings at a later date.

To help our animal rescuers to keep rescuing animals like Nightingale and keep our animal hospitals and centres running for emergency treatment and round the clock care through these unprecedented times, please consider donating whatever you can spare.