Warning: This story contains graphic content that may be upsetting for some people.

A woman has been jailed for 18 months and banned from keeping animals for life after causing what has been described as a 'total animal welfare disaster'.

Our inspectors found suffering animals among piles of animal carcasses, with some trapped waist-deep in faeces at a farm in Bristol. 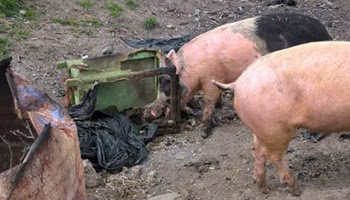 Susan Smith, aged 61 was sentenced for 27 offences following a prosecution lead by our team in hand with South Gloucestershire Council.

Complaints had been made by members of the public expressing concerns about animals at the farm and on 14 March 2015, our inspectors attended. Our team discovered a barn containing sheep, goats and cattle, which was deep in faeces and reached the knees of cattle.

There were a large number of dead sheep and cattle in the barn, and lethargic sheep were lying on top of and under sheep carcasses. They were in various stages of decomposition and, in places, were piled on top of one another.

There was no food or water provided, and our Inspectors saw that the sheep had severe wool loss with skin exposed.

In the middle of the cattle area was a large dead cow lying on its side with a young calf next to her. There were other dead cattle by the wall of this barn at varying stages of decomposition.

Animals were being kept in squalid conditions

Our Inspectors found pigs with no dry area as well as numerous hazards, such as bricks and scrap metal, while animal carcasses lay on the ground.

All around the farm was scrap metal causing a potential hazard - including metal pens, hutches, vehicles and other obstacles - which presented a risk for the animals on site.

Vets attended, with one noting how he saw approximately 40 dead sheep, and that live sheep were lying alongside the deceased.

A cow was found lying down in a corner and in a small fenced area behind it were two bags of what appeared to be animal bones. There was also a small green trailer - which contained a carcass which may have been a calf but was difficult to identify due to the level of decomposition - and a pig carcass was seen being eaten by a live pig.

Our Inspectors returned over the following days alongside police, vets and officers from the local authority. As the investigation went on, further carcasses were found. Two pigs were also found eating what appeared to be part of another pig carcass and many of the pigs were thin, in poor condition, suffering from mange and being kept in squalid conditions.

They also found a large square plastic open-topped tub which was described as containing a  "soup" of rainwater and decomposed animal- most likely sheep.

A collector of fallen stock attended and collected almost 100 dead and decomposed sheep, in addition to lambs, horses, a cow, goats and pigs, and returned a few days later to remove further carcasses.

Between March and July 2015, there were 46 visits made by our team to Ingst Manor Farm (at only six were no specific concerns identified). Of the 46 visits, there were concerns on 16 visits regarding animals not being given free and permanent access to water.

There was a continued failure to provide a safe environment for the animals, leading to a number of animals becoming injured or trapped and suffering as a consequence.

The farm was "nothing short of a total animal welfare disaster"

Vet, Dr David Martin, described the situation in court as "nothing short of a total animal welfare disaster" and said the situation took weeks and months of cumulative poor husbandry and neglect to reach the disaster levels which were discovered by our lnspectors. He said:

I can think of no good reason to explain the presence of a horse's hoof in amongst deep slurry in a pig pen other than to reach the obvious conclusion that the body of a horse has been fed to the pigs.

He also noted that the level of mortality on the farm was exceptionally high in all species and said the mortality rate of the sheep was approx 58 percent.

The flock was infected with untreated sheep scab for which the vet said treatment is easily provided by use of injectable products which can be bought either from a vet or an agricultural merchant.

Many sheep had fractures to limbs because of the hazardous environment in which they were being kept.

Dr Martin went on to raise particular concern at the fact that the pigs were cannibalising their dead as he said this is associated with an extremely high risk of serious disease.

He concluded that many of the animals were caused to suffer and that their needs regarding environment and access to food and water were not being met.

During one visit a cow was seen in the barn on the floor. After her death, she was taken for a post mortem examination which showed she had sustained significant injury which would have caused her pain some days prior to her death, yet no vet treatment or investigation was sought.

Following further complaints, additional visits were made to the farm in 2016 and 2017, where further offences were uncovered.

Our Inspector Miranda Albinson, who described the farm as one of the worst cases of animal cruelty ever seen, said:

The conditions at the farm were upsetting. The suffering of the animals will stick in the minds of all those who helped with the rescue. It was heartbreaking.

This was a shocking case, where a large number of animals endured unnecessary suffering. We¿re pleased to finally see this case reach its conclusion and that the judge recognised the severity of the offences and handed out considerable punishment.

Failure to comply with animal by-product and movement record rules are serious breaches of legislation which aim to control disease risks, ensure livestock traceability, and protect the integrity of the food chain. Not only do some diseases pose a risk to public health, but the spread of animal diseases can have a devastating effect on farmers and the rural economy. This person has shown an ongoing disregard for these rules and a failure to take on board any advice given to them.