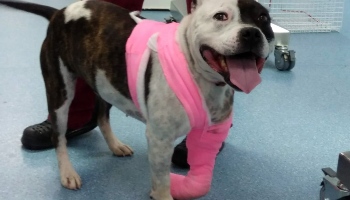 We're appealing for information after a dog with severe leg injuries was found abandoned in the Stirchley area of Birmingham.

The Staffie was found in Pershore Road, Stirchley, on 24 April with her mouth bandaged shut and the wounds to her legs. She was taken to a local vets, who contacted us. The dog - now called Zena - is now recovering at our Birmingham Animal Hospital.

Initially it was thought she'd been hit by a car but when vets had a closer look at her they could see that clearly this wasn't the case. The injuries to her legs were terrible and she was howling in pain when she was rescued.

We were concerned that she might need her leg amputating - we're hoping that isn't the case but it could still go either way.

Zena is microchipped and we got in touch with the person whose details were on there but sadly they had given her away and the details on the microchip weren't updated. We're really hoping someone will come forward and get in touch with us as we are keen to find out how Zena came to be in this way.

Zena had puncture wounds - likely to have come from another dog - to her front legs and chest which were bleeding heavily, however despite her injuries, Zena is thankfully recovering well.

She's a really sweet dog, everyone who meets her loves her. She's really starting to show off her Staffie smile. It's so sad that such a sweet dog has gone through what she has. Once she has recovered and if no one claims her then we can start looking for a new home for her.

Anyone with information about Zena should contact our appeal line on.

We have pets looking for new homes if you're looking to rehome an animal.