We're appealing for information after a dog - who it's emerged is trained in German - was abandoned outside our Leeds, Wakefield and District Branch Animal Centre with what appears to be cigarette burns on his body.

The male American bulldog was tied to the gates on Moor Knoll Lane, East Ardsley at 6.45pm on Saturday 1 August.

CCTV shows a black Mercedes with what appears to be foreign number plates pull-up outside the centre. The driver gets out, goes to the rear of the car to get the dog and ties him up.

We had to call for an inspector to come and help as the dog was being rather aggressive and although he was wearing a pretty hefty muzzle the staff were struggling to get near him.

It took two of our animal care assistants and the officer to free him and get him up to our kennels.

Found to have some burns to his body 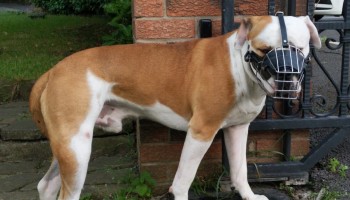 Once calmed down staff were able to remove his muzzle, and get a look at him.

'Hector', as he's been named, is described as a tan and white unneutered male. He was in good body condition, with what looked to be freshly cut nails. He was found to have some burns, thought to be cigarette burns, on his body, one of which was fairly new.

As he wasn't microchipped there's no way of tracing his owner at the moment, but staff are hoping that they may have discovered a big clue.

He really shut down after what must have been a terrifying ordeal for him but after a few days of getting used to the staff he's doing a lot better and seems much happier.

Initially he wasn't responding to any English words so - given the foreign plates on the car - we tried some other options and it emerged he was actually very well trained, in German!

He's a quick learner and even after just a few days is already picking up English.

We urge anyone with information to come forward

Anyone with any information about who Hector belongs to should call our inspector appeal line on 0300 123 8018 and ask to leave a message for inspector Emily Stodart, who's investigating what happened.

Poor Hector was very distressed when he was found.

We would like to find out how Hector came to have these injuries and who abandoned him in this way.

If you can help us to locate his owner please call me.

To help us keep investigating incidents like this during these unprecedented times, please donate whatever you can spare online.