null Dog suffered for three days in garden after being beaten, poisoned and stabbed

Dog suffered for three days in garden after being beaten, poisoned and stabbed

The dog's owners have been jailed after pleading guilty to causing unnecessary suffering.

A dog was left suffering a "slow death" for three days after her owners beat her with a bar, poisoned her with antifreeze and then stabbed her in the neck, a court has heard.

American bulldog Luna was attacked by her owners in the garden of a property in Parkside Road, Birkenhead. 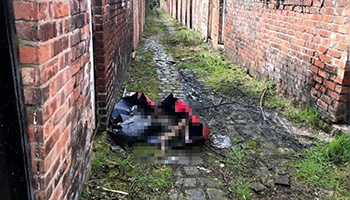 Her owners Leila Horvath and Norbert Farkas, appeared at Wirral Magistrates' Court Tuesday 13 August, where they were sentenced for a total of six animal welfare offences between them, in a case brought about by our inspectors.

They were each given an immediate 10-week prison sentence and a lifetime ban on keeping animals.

The court heard that our inspectors got involved on 5 April this year, after Luna's body was found with stab wounds in an alleyway behind the defendants' house.

A post-mortem examination showed that Luna had been attacked with a blunt object, a knife and had also been poisoned with antifreeze. Enquiries led our inspector Anthony Joynes to Horvath and Farkas's home address. He said:

Farkas said that Luna had 'gone for' his foot and that although there was no injury, it hurt and he felt fear for his and his partner's life. He described using a metal weightlifting bar to forcefully strike Luna two to three times on the head.

Farkas stated that Luna had been alive in the garden for around an hour. Horvarth admitted that she had then gone outside and given Luna antifreeze in sausages.

The court heard that Luna had recently had 12 puppies and had become protective of them. Magistrates were told that Horvath said:

She [Luna] was terrible after she gave birth, I know it wasn't the right thing to do but we couldn't afford everything.

Horvath said she had researched the cost of getting a dog euthanised and had also researched poisoning dogs and what chemical to use. Over the next few days, Luna was in the garden slowly dying from poisoning until she was stabbed to death three days later.

It's absolutely horrific to think what Luna went through. Luna was caused suffering on multiple levels over several days, which was unnecessary and cruel. Horvath and Farkas knew Luna could have been put to sleep humanely by a vet but evidence shows that she was killed over a period of several days, leaving her to suffer greatly.

A male American bulldog and 12 puppies were seized

A male American bulldog and 12 puppies were seized from Horvath's and Farkas's address by police while an investigation was carried out.

Vet examinations of the puppies showed that they were suffering from respiratory illnesses. All 12 puppies have now been rehomed. The male dog is now in our care and will be up for rehoming soon.

To help out team continue to fight for justice for animals who suffer, please consider donating today.