Share this...
Dog abandoned with 'worst dental disease and ear infections ever seen' 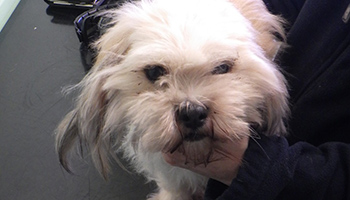 A little dog was abandoned in a stranger's garden with the 'worst dental disease and ear infections ever seen' by RSPCA rescuer.

Poppy was brought into Woodside after she was found dumped in an unsecured garden in the Eyres Monsell and Aylestone area of Leicester. It is believed she may have been straying in the local area.

She has some of the worst dental disease and ear infections I've ever seen.

He has made enquiries in the local area and is now appealing to the public to help with his investigation. He added:

"Poppy is underweight, has a matted coat, and has really severe infection in her ears, mouth and left eye. She's going to need extensive treatment and will be in Woodside's care for some time.

"Someone has allowed her to get into this state and I will be investigating who was responsible for failing to seek veterinary treatment for her."

Anyone who recognises Poppy or can help with these enquiries should contact our appeal line on.