Our team joined the police in raiding the 4Paws site in Lincolnshire in March 2018 and removed 160 animals from unsuitable conditions.

A couple who imported 4,600 dogs from overseas over 15 months were today handed suspended prison sentences and disqualified from keeping animals after police and our officers removed 160 animals from their rescue centre and veterinary clinic in Lincolnshire. 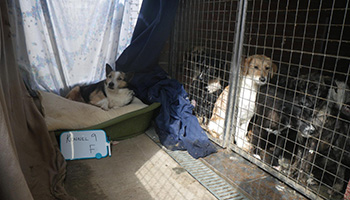 Our officers joined Humberside Police as they executed a warrant at 4Paws in South Killingholme on 22 March 2018. 4Paws operated an unlicensed boarding kennel after their licence expired, as well as a veterinary clinic but it's main business was importing street dogs from Romania to rehome in the UK.

In one of the largest ever operations we've been involved in, more than 60 staff from multiple agencies worked throughout the day to remove a total of 160 animals - 144 dogs and 16 cats. The rescued animals were then taken in by our centres as well as those belonging to Dogs Trust.

Sadly, the body of one deceased dog was found in the onsite clinic. It was later discovered the dog had distemper, a lethal viral disease. Three further dogs had to be put to sleep, two of which had Brucella canis - a serious contagious disease that can be passed onto humans - and one which tested positive for distemper.

The investigation into 4Paws was led by our Special Operations Unit (SOU). The officer who led the probe - who cannot be named for operational reasons - said:

We launched an investigation following intelligence from a number of sources that suggested dogs were being imported from Romania without the proper health or biosecurity checks. We were also told that the animals were being kept in wholly unsuitable and inadequate conditions at the 4Paws site in Lincolnshire.

When officers raided the property they found many of the animals kept in cramped kennels and cages with no access to food or water. Our SOU Chief Inspector, Ian Briggs said:

The kennel blocks were seriously overcrowded. One dog - a large Romanian shepherd called Bear - was in such a small kennel that he could barely lie down. He was extremely distressed and we had to sedate him to remove him from the site. We understand that he'd been there, in those conditions, for three years - and had only been out of his kennel three times.

He's now in our care and is coming on leaps and bounds. Thanks to the tireless work of staff and behaviour experts, his confidence is building and he's beginning to trust people again. 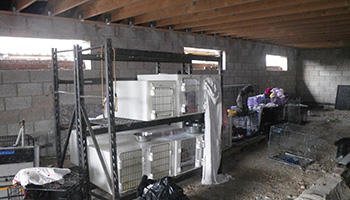 Officers found some runs with four or five large dogs living in cramped conditions while others were kept in makeshift runs in corridors. Many of the dogs also had untreated health conditions - such as respiratory problems or ear infections - or untreated wounds.

All of the animals had to be taken straight into quarantine and underwent a series of tests to check for numerous serious diseases while others needed medical treatments for untreated conditions and problems.

Officers removed 183 pet passports on the day of the warrant. Investigations revealed that the Fairbrothers had imported 4,600 dogs between January 2017 and March 2018.

Officers spent over a month trawling through six months worth of CCTV footage which showed a number of welfare offences. In one section, the dog who had been discovered dead by officers in the clinic on the day of the raid was seen trembling in a cage. The video showed that staff failed to give the dog any time outside of the cage or give her any food or water for three days.

In another video, a cat is seen being dropped off at the clinic by their owner with a leg wound. The cat is left in the carrier for two days and is given no food or water during this time while the wound is also not tended to.

Importing street dogs from abroad to rehome here in the UK brings about many challenges, many of which were evident from this operation.

Many of these dogs had not had the necessary legal checks they needed to enter the country, meaning they had the potential to be carrying serious diseases such as rabies. Two of the dogs removed from the site had to be put to sleep as they tested positive for a severe, zoonotic disease called Brucella canis, which can be passed on to humans, while a third was suffering from distemper.

All of the cats were signed over into our care by the Fairbrothers. A number of the dogs were signed over. Most of the dogs and cats have now been rehomed - including a number of dogs that were handed over to their owners who'd already placed deposits on them via 4Paws. The judge issued a deprivation order on the five dogs who remain in RSPCA care awaiting rehoming so they can now find new homes.

Both were sentenced for offences under the Animal Welfare Act 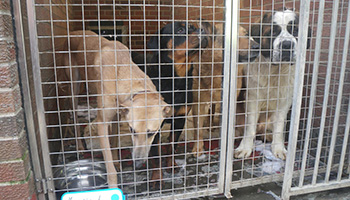 Jodie Fairbrother and Paul Fairbrother appeared in Grimsby Magistrates' Court on Thursday (12 September) to be sentenced for a string of offences under the Animal Welfare Act.

Could you adopt a rescue animal?

Rescued Romanian shepherd, Bear is looking for an experienced home with a family who are used to large, guarding dogs.

Four cheeky British bulldogs - Ginny, Sonny, Iris and Inca - are also looking for patient owners who can give them time to adjust to their new homes.