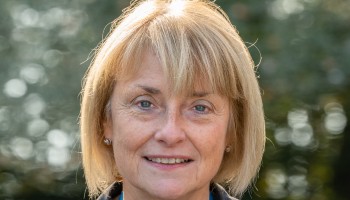 Brenda has been a member of the RSPCA since 1980. She is a member of RSPCA Derby & District branch, having served as branch trustee and chair for many years. Brenda is also on the branch affairs committee and the animal welfare committee. She first got involved in animal welfare as an anti-hunt campaigner and became a vegetarian turned vegan many years ago.

Brenda has worked in the public sector, having been on the front-line with programmes for the sick and unemployed. She has volunteered all her life for human charities and is currently a bereavement support volunteer for Cruse. Brenda is also a committed member and supporter of many animal welfare charities including Hillside Animal Sanctuary, Viva!, League against Cruel Sports and Buglife.

Her interest in environmental and wildlife issues also led her to chair a local environmental group.
Brenda has only ever adopted old cats who are hard to rehome and she currently shares her home with Hopscotch, a 14yr blind tortoiseshell cat.