null What are we doing about non-stun slaughter?

What are we doing about non-stun slaughter? 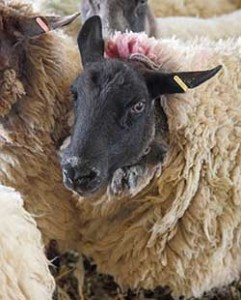 We've been opposing non-stun slaughter for decades but the release of new statistics brings fresh light to this crucial topic.

In September 2017, the Food Standards Agency (FSA) published data that included new statistics on the number of animals that were slaughtered for religious purposes without being stunned in England and Wales.

This is the first time that data on this issue has been collected since 2015 and it suggests a significant increase.

We're very concerned about this. Dr Marc Cooper, our head of farm animals, talks us through what this means for farm animal welfare, and how we will continue to tackle this issue.

What is non-stun slaughter?

Legislation in the UK requires all farm animals to be stunned before they're slaughtered. Stunning ensures animals are unconscious at the time of slaughter, so they cannot feel pain or suffer. For slaughter to be humane, it's essential that animals are effectively stunned. So, we've always been opposed to the slaughter of farm animals without first rendering them unconscious with an effective stun.

However, European law does have an exemption - which the UK implements - that permits the slaughter of sheep, goats, cattle and birds without pre-stunning. This exemption is made when the slaughter is for religious purposes, i.e. Halal and Kosher meat for Muslim and Jewish communities, respectively.

Can stunning and religious slaughter work together?

It can be considered permissible under Islamic law for the animals to be pre-stunned. In fact, around 84 percent of animals slaughtered in the UK by the Halal method are stunned first.

Shechita (Jewish) slaughter does not allow stunning of the animals before slaughter. We think this could be improved by stunning the animal immediately after throat cutting. Although this is not a satisfactory resolution, it can help improve animal welfare by reducing the period of suffering whilst providing meat that may be compliant with Jewish law.

Therefore, there doesn't necessarily need to be a ban on the meat that is important to some religious communities to ensure animal welfare is at least better considered.

How many animals aren't stunned prior to slaughter?

The FSA numbers suggest there's been a sharp rise in the number of animals being slaughtered without pre-stunning over the last two years.

The data was collected over three months, from April to June 2017. It revealed that 24 percent of sheep and goats, 19 percent of poultry and one percent of cattle slaughtered for religious purposes in England and Wales did not receive a pre-slaughter stun. This means that in total only 81.5 percent of these animals were stunned prior to slaughter.

However, it's important to note that the FSA data was collected over a limited period. This means the annual figures could be significantly different - greater or smaller - than those stated above. The FSA will be publishing these figures quarterly, so a more complete picture of the situation will become clearer over time.

We've been working on this issue for decades, and at every opportunity continue to press UK governments and food businesses for an end to the slaughter of animals without stunning.

In 2015, we joined with the British Veterinary Association (BVA) to call for an end to non-stun slaughter. Over 100,000 people signed our joint petition, which led to a debate in Parliament.

We also want clear transparent labelling that will ensure consumers are aware of what they are eating. We wrote to the Government minister this month to ask for this to be implemented as we leave the EU.

Will non-stun slaughter be affected by Brexit?

Brexit does gives us an opportunity to change the law, such as a move towards the mandatory labelling of meat from animals that have not been pre-stunned, as well as changes to the stunning methods for animals.

Encouragingly, the government seems to be in listening mode when it comes to improving the welfare of farmed animals, as we saw with last month's proposal for mandatory CCTV in slaughterhouses.

Do you have more information concerning non-stun slaughter?

If you would like more information on this issue, you can read our information sheet on slaughter without pre-stunning.

How can I take action?

Take action today to #EndNonStun by signing our open letter.

You can also keep up with our new campaigns, and be the first to hear about fresh updates and chances to act by signing up to our campaign newsletter.