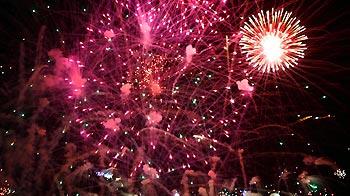 Parliament is going to be debating our current fireworks regulations on Monday 29 January. This is welcome news to everyone who's concerned about the considerable negative effects that fireworks can have on animal welfare.

We're urging MPs to attend the debate, and support changes to the laws that regulate fireworks - preventing the unnecessary fear and suffering that they can cause to animals.

Why fireworks aren't fun for everyone

The sudden loud noises and bright flashing lights that most of us associate with fireworks, can be very frightening for many animals. It's estimated that 45 percent of dogs show signs of fear when they hear fireworks. And animals can end up injured when they run and hide from the fireworks too.

And it's not just our pets who suffer when the fireworks are out, livestock can be startled, and are at risk of injuring themselves on fencing or the fixtures within their housing. Wildlife are also likely to be distressed by the explosive noise and light. And the debris which the fireworks leave behind could pose a risk to any animal who comes across them.

Over the last seven years we've seen a dramatic increase in the number of people calling our emergency line, worried about the effect that fireworks are having on the animals around them.

What laws are currently in place?

The Fireworks Act 2003 and the Fireworks Regulations 2004 were introduced over a decade ago with the aim of reducing the noise, nuisance and injuries caused by the misuse of fireworks across England, Wales and Scotland.

The current main regulations are:

Although this legislation was a good start, we'd like to see it go further to protect the welfare of the animals around us.

We're supporting calls for three important amends to be made to our current firework regulations, and we hope that they will be raised in the debate on 29 January. These are:

Fireworks don't have to be so scary

Although we want to see changes to our firework regulations, to protect all animals - there are things that you can do to make the experience less scary for your pet.

Firework phobia is a treatable condition, and you should seek advice from your vet who will, if necessary, be able to refer you to a professional clinical animal behaviourist.

You can also contact us if you're concerned about livestock or wild animals who have been affected by fireworks and their debris.

The action is now closed - but we had an incredible response!

Over 1,700 people took action and emailed their MPs about the firework debate over the last week. That's incredible!

At the debate it was confirmed that a new Office for Product Safety and Standards is to be created, which will support local authorities in reviewing and enforcing the current guidance materials on the safe and responsible use of fireworks. This is a significant first step in making fireworks fairer for everyone.