It's time for horse racing to wave goodbye to the whip

It's time for horse racing to wave goodbye to the whip

Over the years, attitudes to animals have changed and concern about the welfare of the animals we share our lives with and get so much enjoyment from has increased. As far as we're concerned this is a good thing. It's undoubtedly resulted in greater scrutiny of the many ways we interact with animals, including the use of horses in racing and other equestrian sports.

This greater scrutiny and resulting change of attitudes is often talked of as a change in 'social licence to operate'- a rather technical way of acknowledging that particular uses of (and behaviour towards) animals is only permitted through acceptance by wider society. Hitting horses with a whip in an effort to drive them forward and get them to the winning post ahead of others is an example of behaviour towards horses which is - rightly - under the public microscope, particularly at this time of year when the Cheltenham and Grand National Festivals take place.

Public consultation on the use of the whip in British horseracing

Perhaps acknowledging this, the British Horseracing Authority opened a public consultation on the use of the whip in British horseracing last year. Naturally, we submitted a response setting out our view and indicating the science supporting this. Having been delayed, it's expected that proposals from the steering group considering the matter will be considered by the BHA Board in April and the full report and recommendations published in May. Any rule changes deriving from the exercise will likely not come into force until the autumn of this year.

This year, as before, we'll continue to witness the unedifying spectacle of horses being repeatedly struck with the whip, particularly approaching the finishing line - when horses are likely to be tired and least able to respond, especially in long races such as the over four-mile-long, thirty jump Grand National Steeplechase.

As far as we are concerned, it's already well past time to see the end of the use of the whip to drive horses forward- for 'encouragement' as the BHA calls it. Our view is supported by the available science.

The 'unevidenced claims' of whip defenders

Contrary to the unevidenced claims of some whip defenders, striking horses with a whip in the way it's used in racing causes pain. This isn't just what we think  - videography has shown alteration of skin and muscle when horses were struck with the whip. Although the lower part of the whip is designed to be energy absorbing, the unpadded part made contact with a horse in nearly two-thirds of strikes, makes the padding irrelevant. Studies in other species (including humans) indicate that such deformation is likely to be sensed by pain receptors in the skin.

Defenders of hitting horses might claim that equine skin is thicker than human skin, or that somehow they feel the blows less, but the scientific facts don't support this. The layer of horse skin where pain receptors are located is of similar thickness to that in humans and is just as richly populated with pain-sensing nerves. The concept of the thick-skinned horse not feeling whip blows is a myth. In any case, simple logic tells us that the horse must feel whip strikes - if the horse were not able to feel and react to them, then why use the whip at all?

Horse responses to the whip

Some who deny that the whip is painful argue that the horse responds to the sound of the whip in the air or the sound of its impact on their skin. It's a basic principle of animal behaviour science however that even the simplest animals decrease or stop responding to repeated stimuli that have no consequence. If the whip isn't associated with pain, the sound it makes would have no significance, and so horses wouldn't respond to it.

Jockeys argue for the use of the whip 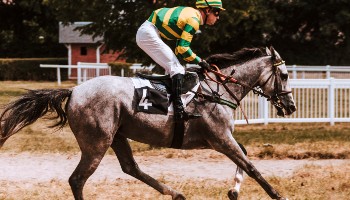 Jockeys will often state that the whip should be available for the safety of horses and themselves. Scientific evidence, however, suggests that the use of the whip during races can actually increase the risk of injury, falls and further suffering and death in horses and potentially humans. One study observed video footage of over one hundred cases of fatal equine limb fracture occurring in races at all UK racecourses over a two year period. When fracture and uninjured control horses were compared, those whipped within the last 10 seconds were more likely to sustain a fatal fracture.

A Japanese study reported a relatively high association of recent whip use with catastrophic injuries such as bone fractures or joint dislocations. Of 34 horses observed sustaining such injuries in video captured at racetracks, 38% of these were observed to be whipped immediately prior to the injury. A study of UK hurdle and steeplechase races found that horses that were being whipped and which were gaining position were at more than seven times the risk of falling than horses that were not being whipped and which had no change or lost position through the field. Finally, as horses tire they attract whip use, and it's been suggested that this may lead them to make errors in sense of self-movement and body position which may result in falls and injuries.

Our call to the British Horseracing Authority

Based on all the evidence our call to the BHA and everyone in racing is simple - it's time to get rid of the whip for encouragement, and further research needs to be conducted to identify whether the whip even needs to be carried at all. What we certainly don't need is this ridiculous and rather cynical suggestion we've heard from some, (given credence by appearing within the BHA consultation response as an option) 'renaming the racing whip would aid public understanding of its use'. We don't think people concerned about the impact of the whip on racehorse welfare would fall for simply renaming the whip (e.g. as 'the encourager') in an effort to deflect public concern; pardon the pun, but that is a total non-starter!

I write this blog following the 2022 Cheltenham Festival, which claimed the lives of four horses- Shallwehaveonemore, Born Patriot, Mindsmadeup and Ginto. This is the worst number of horse deaths since 2018, when the death of seven prompted the BHA's Cheltenham Review of that year. The 2020 and 2021 Festivals each saw the death of one horse. Of course, the death of just one horse is always one too many. The death of four at Cheltenham this year causes us huge concern, and we'll be asking the BHA to consider whether they can identify and address any factors contributing to this.

Given the evidence we've presented on the role of the whip in equine injury and fatalities, we'd expect them to include this in their analysis. I also wonder whether with the thrill of the crowds and the 'Cheltenham Roar' returning and with the improvement in the years following the changes resulting from the review, racing's attention may have drifted slightly from the ultimate prize of a safe Festival - one where no horses are injured or die in the name of entertainment and where they truly are safe - and happy - athletes. The reaction to this year's fatalities shows us that continued social licence to race horses over jumps requires a constant, laser-like focus on equine safety. Society at large, and we, expect nothing less.