As the kaleidoscope of colours and shapes fly across the sky for Bonfire Night, many of us are captivated by the 'oohs and ahhs', with our minds far away from anti-social behaviours and irresponsible misuse.

While many of us see the stories filling our feeds and covering newspaper pages, for many of us Diwali, Bonfire Night and New Year's Eve are simply a time for us to come together and celebrate, spending time with family and friends. But for a small minority, the sale of fireworks brings with it the opportunity to wreak havoc, disrupt neighbourhoods, create fear and cause chaos. 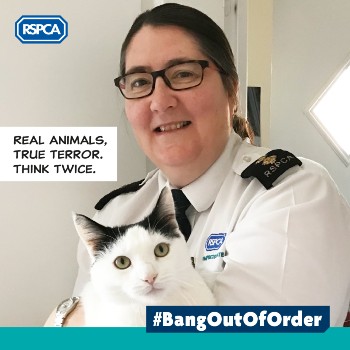 Rosie has worked as an RSPCA inspector for 22 years and is well versed in incidents affecting animals during this period, but on the 5th of November 2020 fireworks affected her in a way that she would have never expected when responding to a call from a concerned member of the public. Rosie recalled:

"It was 6pm and dark outside when I attended the call in Penenden Heath, Maidstone.  The women who placed the report earlier that evening, after searching for some time in a field in Coxsheath, had found two very unkempt and very hungry little kittens.  She didn't know if they had been thrown out or abandoned by their mother. Getting concerned for their welfare, they called the RSPCA for support.

They were so tiny and thin and no matter what she had tried to feed them, they would not eat.  I wrapped them up, placed them in the basket and set off to get them the care they needed.

"The bang was so loud that I was briefly deafened"

As it was Bonfire Night, festivities were already in full swing, lighting up the night sky, but what happened next I was not expecting at all. Upon approaching my van out of the darkness came a very large firework that had been thrown towards me and exploded within a meter of my head. It was so close I felt the movement from it and whether it was that or simply the shock, it seemed to physically throw me back.

The bang was so loud that I was briefly deafened, it scared the living daylights out of me and my ears were ringing from the sound.  It was like a mortar going off. I stood behind my vehicle and was immediately concerned for the kittens' hearing, they were so small. If it had affected me the way that it had, it must have been ten times worse for them, at least I could rationalise what had just happened.

The kittens had already had a very distressing day, and this loud noise would have been very shocking to them on top of what they were already experiencing having been separated from their mum.

The effects to my hearing lasted a couple of weeks while the kittens were hand-reared by my partner and I. They went on to be rehomed when they were eight weeks old and I'm so relieved we were able to help them.

"I have responded to reports of cats with fireworks tied to their tails."

In this case, the cats and I were lucky to have come away unscathed but in previous years cats and other animals I have responded to in my duties have not been so lucky. In years past, there have been traumatic incidents relating to fireworks. I have responded to reports of cats with fireworks tied to their tails.

Sadly, the perpetrator also lit the fireworks, causing significant injuries and psychological damage. It¿s time for this cruelty to stop and better regulation is long overdue. This isn't about ruining anyone¿s fun, but preventing fear, life-changing injuries and even death for animals."

The RSPCA is calling for regulation changes to help make fireworks less frightening for animals.

Stand up for animals