Amy Ockelford, our press officer and mum to rescue dog Storm, tells us about her experience battling Storm's obesity. 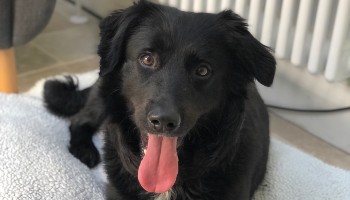 Almost half of all pet cats and dogs are overweight or obese. Unfortunately, fat pets have become normalised over recent years and many owners don't realise that their pet is obese - as well as the health problems obesity can cause.

When people see the heartbreaking images the RSPCA shares of dogs who have been starved to the brink of death, they're filled with anger and disgust. Why don't they see that their fat pet is just as unhealthy?

Pet obesity: We're a nation killing our pets with kindness

Pet obesity is a huge problem in this country. We're killing our beloved pets with kindness. I never thought I'd be on the other side of it, owning a dog who desperately needed to shed some pounds. Enter: Storm.

When Storm first arrived at our Stubbington Ark centre in March, he was wildly obese. He's naturally a big dog - some sort of collie cross Labrador (although we're convinced there's a hint of mountain dog somewhere in there, owing to his GIANT bear-sized paws!).

Recognising Storm's obesity and helping him to lose weight

It was clear for everyone to see that he was incredibly overweight. He had no defined waist; you couldn't feel his ribs below the thick coat and layer of fat. He weighed in at 45.7kg - almost double what vets felt was a healthy weight for a dog of his size. So began a serious weight loss regime.

When we welcomed the five-year-old into our home in July, he'd already managed to shed almost 10kg thanks to vets and staff at the centre, but he still had a long way to go. We also needed to balance his weight-loss programme with settling him into a new home, starting basic training and trialling new allergy diets to tackle his itching!

We persisted with the special diet the Ark's vet had placed him on. The quantity was strict too; 260g a day. Each morning we weighed it out. Half for breakfast, half for dinner. And any treats for training during the day had to come from the same pot. There were to be no extras. Zilch.

Storm's obesity meant that games would leave him limping

We have no idea how long he'd been overweight, and carrying this extra weight seems to have had an impact on his joints. Playing ball is his favourite thing in the world - but even short games would leave him limping.

X-rays thankfully didn't show any arthritis or serious damage, so he'd just have to take it easy while he continued losing the weight. The less weight on his legs, the less strain his joints would be under. The fitter he became, the better - although, this wasn't easy either! He'd been having nice walks while in kennels but we were used to two, long walks a day - while Storm clearly wasn't!

We had to introduce exercise gradually. Initially, it was little and often. Several short, on-lead walks and toilet breaks. Slowly, we began to build it up to more off-lead time and more playing.

We gradually introduced Storm to his new healthy lifestyle 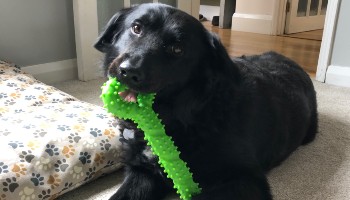 We collected Storm just weeks before the heatwave hit and, with temperatures soaring over 30, this was another factor that we had to keep in mind. While he'd lost another 5kg, Storm was still carrying extra weight and with a thick coat too, he struggled in the heat.

The exercise plan had to take a bit of a back foot, and time was instead spent in the cool house, snoozing on his cool mat with a fan and iced treats (still out of his daily allowance!).

Now it's a little cooler and we're two months in, Storm's weight loss is going well. He's finally dropped below the 30kg mark and has just a few more kilos to lose. He's getting fitter and more active, he's enjoying longer walks, and he's even playing with his ball in the garden without any pain in his paw or legs!

He's also had a good haircut which has made him much more comfortable and makes him look much slimmer. His waist is finally defined and he's definitely lost some inches around his belly!

There's still a long way to go to continue - and maintain - his new weight and new fitness, but hopefully, it's onwards and upwards for Storm. We know that all of this work will be worth it because he'll live a longer, happier and healthier life for it!

Find out more about caring for and providing the right diet for your dog.

Is my dog obese?

You can use our guidelines to assess your dog's weight and check in on their health. A healthy weight truly means the world to your dog's health and quality of life.