This week UK health officials have been warning of a "hidden pandemic" of antibiotic-resistant infections - but the conversation so far has only focused on people taking antibiotics, not the systematic use of them on farms. It's important to understand and address how our relationship with animals and the natural world has a direct impact on our health...

Why the fuss about antibiotics?

Antibiotics are a cornerstone of modern human medicine, both in terms of treating disease and in managing the risks of surgery. Since their discovery in 1928, antibiotics have revolutionised modern medicine and gone on to save millions of lives.

Sadly, the ongoing overuse of antibiotics in human and animal medicine is damaging their effective ability to cure life-threatening infections. This is a result of dangerous bacteria becoming troublingly resistant to antibiotics. Experts predict that 10 million people a year could die from antibiotic-resistant infections by 2050.

If antibiotics were to become ineffective, millions would die as a result, and the cost to health services would be astronomical.

Back in 2014, when launching a review into the threat of antibiotic resistance, then Prime Minister David Cameron said:

If we fail to act, we are looking at an almost unthinkable scenario where antibiotics no longer work and we are cast back into the dark ages of medicine where treatable infections and injuries will kill once again.

What does farming have to do with antibiotic effectiveness? 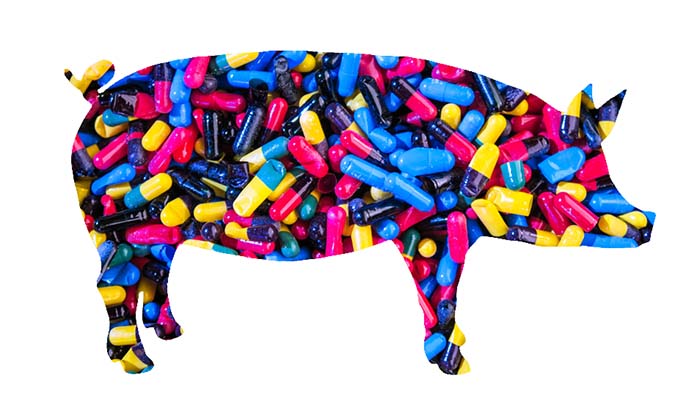 Antibiotics are sadly systematically overused in intensive farming - commonly the case with poultry and pigs. All over the world, vital antibiotics are given to healthy animals in an attempt to compensate for low-welfare, stressful, cramped conditions where outbreaks of disease are common.

Campylobacter is a bacterial disease that causes nasty food poisoning in people and is also found in poultry. Reports from Public Health England show that in 2015, a strain of Campylobacter in humans - Campylobacter jejuni - reached a record high resistance of 48% to the antibiotics used to treat it - fluroquinolone. This resistance was strongly linked to the use of these antibiotics being used on poultry to treat the disease, and the resistance that built against them in chickens.

It's a technical and complicated issue, but the headlines are clear: antibiotic resistant bacteria can develop in farm animals as a result of the overuse of antibiotics and these resistant bacteria then infect people, transferred either through the environment, meat processing or meat handling. For example, there is a strong link between human and chicken Campylobacter antibiotic resistance - resistance to some antibiotics has grown so much that they can no longer be used and Campylobacter is now showing significant resistance to those antibiotics currently used to treat chickens.

Healthy animals are regularly and routinely dosed with antibiotics and livestock such as pigs and poultry may even be given vital antibiotics that are classed as 'critically important' for humans. Animals who are unwell should of course be treated, but antibiotics are often given to healthy farm animals in routine, preventative ways - through feed or water, and given to whole herds or flocks rather than small groups, or individual sick animals.

What needs to change?

To help to sustain future antibiotic efficacy for human medicine and for treating sick animals, we should move towards less intensive farming models. We also need to ensure that the ban on the routine, preventive use of antibiotics (which is coming into force in the EU next year) is also fully applied in the UK.

We cannot afford to wait. Antibiotic resistance is a clear example of the mutual threat to human and animal health from poor welfare practices. The opportunity is in front of us, we know that reducing antibiotic overuse can reduce antibiotic resistance, and we know that higher welfare farming systems use fewer antibiotics, and support animals to live happier, healthier lives. We must move away from intensive farming, and the over production and over consumption of animal products, to protect human and animal lives.

It's time to take action now. The RSPCA is encouraging people who eat animal products to 'eat less' meat, fish, eggs and dairy and, when they choose to eat such products, to 'eat better' and select products from animals reared to higher welfare standards, such as those products labelled with the RSPCA Assured logo.

As well as impacting the welfare of animals on farms, and benefitting the environment, eating less and better, and a move away from intensive farming, can help to reduce antibiotic resistance and save lives.