For some dogs, fireworks can whiz and pop and make little to no difference other than an occasional glance or partially opened an eye as they doze, warm and cosy in their beds away from the cold winter nip. But for many dogs, like Harley, a rescue dog belonging to Claire and her son George, the firework season is spent hiding, cowering, panting, salivating and shaking. 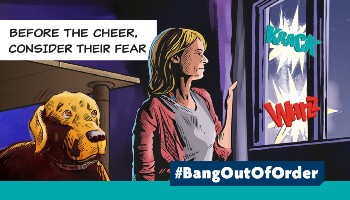 62% of dogs in the UK show signs of anxiety when they hear fireworks. Every year there are reports of pets, horses and livestock suffering trauma, injuries or in the most severe and devastating consequences cases loss of life.

Harley at any other time of the year is a happy, friendly rescue dog and loves nothing better than some fuss and attention. Harley does however have some noise sensitivities including fireworks, mopeds and thunder. Thankfully when mopeds pass and thunder happens it is fleeting and infrequent, unlike fireworks which can last for hours and go on for nights on end with no warning.

"Firework season has a massive impact on my little family's life. Sadly, it is just me to help Harley now as my husband died 4 years ago, however, we have a little boy as well. This means that winter evenings are generally spent at home as from early evening I need to be there to support and reassure Harley. It limits our ability to do things during this time and I just feel so sorry that my generally happy go lucky little dog is so traumatised during this part of the year. It seems so unfair." 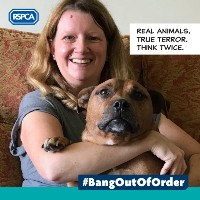 To see a dog in such distress for anyone is worrying, but can you imagine watching your dog suffering and knowing there is little you can do about it and trying to explain to a young child what is happening and why Harley is not himself?

This is how Claire feels every year and not just for one day, this goes on intermittently for months until firework season has drawn to a close.

Claire describes this time of the year as incredibly traumatic for Harley. He becomes incredibly terrified of all things and even during the day, it can be hard to get him to go for a walk as he generalises his fears. It takes a long time to undo the trauma it causes for him each year."

Claire has tried all of the tricks in the book for Harley over the years, from Thundershirts, pheromones, through to dark dens, reassurance and medication. Sadly, Harley's noise phobia is so bad he needs medication to help him and he has a 'safe area' where he can just be if he doesn't want to snuggle up to for reassurance.

"I'm working with him on his noise fears most of the year, quietly changing his emotional response to things he perceives as fearful. However, my preparations for the fireworks season start in earnest in early September each year."

Claire would love to see a ban on fireworks as they upset Harley and so many other animals so much. However, a good second would be a ban on private displays and/or a requirement for display organisers to give people plenty of advance notice. At least this would allow Claire and others to prepare more effectively. Even limiting the days and times when fireworks can be bought and let off would make a difference as it would shorten the period.

Have fireworks affected you and your pets, horses or livestock this year? If so we would like to hear about it.

Learn more about our #BangOurOfOrder campaign.