A blog by our dog welfare expert, Dr Samantha Gaines.

With the launch of our #SaveOurBreath campaign, there was much anticipation felt by myself and colleagues ahead of Saturday's Crufts and pending the announcement of the toy and utility group winners.

Brachycephalics - bringing them back from the brink

It's these two groups that include the three major brachycephalic breeds: the pug, British bulldog and French bulldog - who all have shortened noses and flattened faces.

This extreme look leads to a range of respiratory conditions ranging from snorting and snoring to exercise and heat intolerance, as well as other health issues including skin, dental, spinal, brain and eye problems.

Concerns around these types of dogs have been raised for decades and in the last 13 or so years, we have seen shocking and distressing footage on programmes like 'Pedigree Dogs Exposed' as well as several high profile reports and parliamentary inquiries calling for urgent change.

As this condition affects dogs internationally, we've also seen tough action being taken outside of the UK with legislative changes to curb detrimental breeding practices and, most recently, a ruling in Norway that the breeding of British bulldogs breached their animal protection laws.

Despite the overwhelming body of research highlighting the welfare impact of extreme body shapes and particularly brachycephaly, progress has been incredibly slow. However, recent positive amends to the French bulldog breed standard and prizes given to healthier examples of typically exaggerated breeds earlier in the week did offer a glimmer of hope. 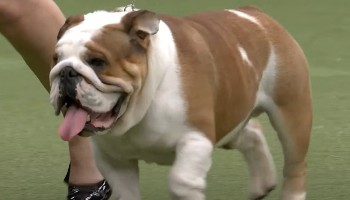 Sadly, this glimmer rapidly faded as we saw the dogs awarded Best in Breed brought out for Best in Group. Across all three dogs, exaggerated features were still very obvious, including flat faces, folded and wrinkled skin as well as short and curly tails.

Yet in the case of the British bulldog, it was especially saddening, as less exaggerated versions of the breed had also been shown on Saturday.

In fact, one of these dogs, Ch Happy and Glorious Hennessy won Best in Veteran. Instantly recognisable as a British bulldog, this is the same dog who was featured in Save our Bulldogs several years ago and the result of efforts by British bulldog breeders to improve the health and welfare of the breed.

It's dogs like Henny and the breeders who produced him who should have been awarded, not the more exaggerated version who was broadcast to millions and paraded as the blueprint for the British bulldog.

It's time to champion change

In 2009, we commissioned an independent scientific report which identified 36 key actions to ensure dogs could experience a good quality of life, free from pain and suffering. These actions, also recommended by others working on this issue, included a review and revision of breed standards as well as training and accreditation of judges to prioritise health, welfare and behaviour.

Thirteen years on, these actions remain necessary but even more urgent. Unless breed standards are rewritten to describe more moderate dogs and these dogs are awarded in the show ring, dogs like Henny, and his breeders, will remain on the sidelines. The question is - will those who have the means to champion these dogs step up and save these breeds?

Help give these animals more room to breathe

We want to see urgent intervention for these types of dogs but to enable change to happen, we need your help to gather as much information as possible.

We need to know every time you see a brachycephalic animal on TV, in film, in advertisements, on physical products or used as a promotional tool online. We'd also love to hear about your own experiences with flat-faced animals.

Find out more about how you can help.