My experience rehoming an RSPCA horse

A guest blog by supporter and rehomer, Sarah Harris.

My partner and I bought our little piece of paradise in 2018, our forever home with land to bring Tommy my Cob home. We had a lovely livery who I had handpicked and all was wonderful for 18 months until circumstances changed and she moved on.

The discussion was then had about whether to replace her with another livery. It was a hard one as our previous livery had been so good and it was always nice knowing there was another person available if you needed them. However, my non-horsey partner decided that the answer was to buy a second horse of our own.

"I hate the process of buying horses - the reality is never as fun as it should be."

Now, I appreciate that this would be music to many horse people's ears, but all I could think of was, one - how much my current cob gelding is a complete princess! And two - how much I hate the process of buying horses - the reality is never as fun as it should be.

When buying Tommy, I remember making phone call after phone call, with people telling me how perfect their horse would be. Visiting yards, having driven miles, only to get out the car and be faced with a horse who, through no fault of their own, was nothing like the advert stated!

Trying to find a million and one different ways to say, basically there's absolutely no chance I am getting on that horse! And trying not to be too obvious as I run back to the car! It took months and months of constant disappointment before I found Tommy and the prospect of doing it all again filled me with more than a bit of dread.

Then I had a brainwave - I'll get in touch with my local rescues and get a horse that way. Well, that was filled with varied success. I didn't really know what I was after other than ideally a gelding around 15hh.

I wasn't bothered about age or ability and didn't mind a horse that needed a little bit of TLC or rehab. I'm a Veterinary Physiotherapist so I have the skill set that could be beneficial to some horses who others might shy away from.

"I began to contact centres, starting with my most local ones."

I began to contact centres, starting with my most local ones. However, the one thing that I constantly came up against was a long term loan. Now for some people, I appreciate the prospect of a long term loan is a perfect solution, but for me, I wanted to own my new horse. Well, that wiped out many organisations and a little despondent, my search stalled.

Then one chilly January day in 2020, whilst treating a horse and chatting to her owner (who it just so happened was a press officer for the RSPCA) about the trials and tribulations of finding a new horse, she mentioned that the RSPCA transfer ownership after a trial period.

Now, I had looked at the RSPCA and discounted them because I thought they would offer a long term loan like the rest. Also, so many horses on the website were smaller than I was looking for. However, by the time I had arrived home, an email had arrived confirming the transfer of ownership discussion and encouraging me to complete the attached search form.

"I was starting to feel excited about this horse search."

An email was received to say they had passed my form on to the relevant people. From there a phone call came through within 48 hours from the RSPCA to say they had the perfect horse. I was starting to feel excited about this horse search.

Patricia, the centre manager rang and told me about a rising three-year-old, 15hh, palomino, thoroughbred cross called Graham (not sure who picked the name but less said about that, the better!). He sounded fab. Patricia was able to tell me as much as they knew about him. We made arrangements for a visit.

"Oh, how refreshing to meet a horse whose description over the phone matched the horse in front of me!"

On arrival at the centre, I was made to feel welcome straight away and one of the team took me to meet Graham. Oh, how refreshing to meet a horse whose description over the phone matched the horse in front of me! I spent a bit of time with him, and chatting to the member of staff who oversaw his care and I knew soon enough that he would fit in with us just perfectly. That was it - he was reserved pending a home visit.

I must admit, having now found a horse, I found the prospect of a home visit quite daunting. You hear so many negative things from people on social media and I worried that the person coming out was going to make it difficult for me to rehome. Well, after a couple of weeks, the wait was over and a lady called Faye rang me to ask if she could pop out within the hour.

"Faye tried to reassure me that this was not a test!"

A lovely lady turned up and immediately put my mind at ease. After meeting Tommy and looking at the stables, we had a little wander around the fields so that Faye could take a look at the fencing and make sure that everything checked out. So far, so good. Next, came a few questions to check if I had a basic knowledge of common health conditions.

I could feel my palms go a little clammy, it felt like I was in an exam, although Faye thought the panic in my face was quite amusing and tried to reassure me that this was not a test! Questions answered, visit complete, no problems at all. Faye would be sending her paperwork back that day to get the ball rolling. I don't know what I was so worried about, she was really nice and we had a social hour or so talking horses.

"They had done a little loading practice with him prior to my arrival."

Arrangements were made and the day arrived that I could collect Graham. The team were ready, final bits of paperwork were completed and our horse was loaded safely onto the lorry. It was my first time bringing home a new horse with no issues at all!

The team were fab. As I had said that I'd be bringing my 3.5t lorry, they had done a little loading practice with him prior to my arrival and so it all went smoothly. There were some tearful goodbyes on the lorry (which was lovely to see - I'd have been more worried if they had looked happy to see him leaving!).

He travelled like an angel. One tired baby pony unloaded at home later, he went happily straight into his stable; wee, snack and drink. He settled in at home like a dream and he and Tommy are now the best of friends!

"What he lacks in height, he makes up for in personality!"

Of course, this would be a lovely end to the story, however, it wasn't quite the end - don't panic, Graham is still here and has now been signed over to me and is officially here to stay! But having had such a great experience with the RSPCA, I got straight back in touch with the animal centre when my partner said; "three would be a better number!"

Spencer arrived in July - he's only 13.2hh, but what he lacks in height, he makes up for in personality. After taking a couple of weeks to come out of his shell, he has fitted in so well with the herd. Once again, I was just so impressed with the team's honesty and efficiency in finding me a further addition to my family.

Due to the pandemic, the first time I met Spencer in reality, rather than on a screen, was as he was loaded onto my lorry. But having had such a positive experience previously, I was confident that the pony I was collecting this time round would be just as well suited.

"Rehoming from the RSPCA has truly made getting a new horse a fun experience (rather than a stressful one!)." 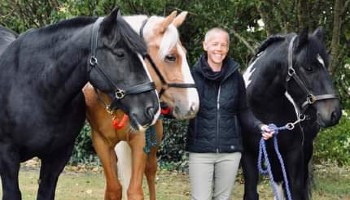 Since bringing him home*, Spencer has taken everything in his stride and I am so excited about our future adventures together. Graham's still being a baby this year, but next year his adventures will start too. I feel so lucky to now have three amazing horses.

Rehoming from the RSPCA has truly made getting a new horse a fun experience (rather than a stressful one!). It has also been nice to have the safety of a trial period - to really make sure that who you have brought home is going to truly work for you and your current herd.

The team were so friendly and supportive and made the whole process an enjoyable one. If I had more time and space, I'd be going back for more! Thank you to everyone involved - especially to the centre staff. You were amazing.

*Photo shows Sarah at her home with her horses (not at an RSPCA centre).

Are you looking to rehome a horse?

Find out how to rehome a horse or pony.

Or, if you're ready to start your search for your perfect horse or pony: Meet our horses currently looking for their forever home.